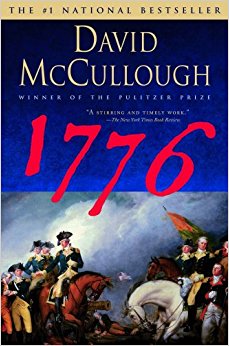 In honor of Independence Day, I recommend 1776 by David McCullough. 1776 is an excellent book. It won a Pulitzer Prize. Simon and Schuster published the book in 2005. Military history fans love this book. 1776 is easy to read, and very fast paced.

David McCullough’s book contains excellent examples of leadership. It motivates because of the central character, General George Washington, commander of the Continental Army. There are several other heroic Americans too to include Henry Knox and Nathaniel Greene.

George Washington as the commander of the continental army provides a rich profile in extraordinary leadership.  There are brilliant, yet simple lessons that can be learned from his example.  Additionally, there are practical applications that we can draw from his early experiences especially when he dealt with setbacks.

During the first summer in which he commanded the continental army, General Washington dealt with a myriad of difficulties, which would have caused a poor leader to quit.  His army was undisciplined compared to the high military standards exemplified by the British.  A telling example of their lack of discipline can be seen in the rampant sickness that occurred throughout the army.  The men were averse to washing, shaving, maintaining clean water, separating areas for hygiene and eating, and they hardly changed their raggedy clothes.

Washington’s troubles also included a lack of adequate resources such as gunpowder and ammunition.  Drunkenness and revelry were also pervasive in the ranks.  Regional tensions persisted between soldiers from the south, mid-Atlantic, and New England.  Another issue that arose was the diversity of uniforms.  Soldiers wore all manner of eccentric uniforms and there was nothing standardized.  It’s difficult to instill in men a sense of loyalty, pride and discipline when everyone is wearing whatever pleases them.  In summary, a great quote about the average soldiers (especially militiamen) mentality reads, “Having volunteered to fight, they failed to see the sense in a lot of fuss over rules and regulations.”

1776 shows how General Washington was able to deal with all of these challenges. It is a great book on leadership, which I highly recommend to military leaders.

From Fort Ticonderoga to Boston: The Leadership of Henry Knox

Henry Knox, a Bostonian, was a spark-plug, twenty-five year old when he came up with an inconceivable idea to procure mortars and cannons for his beleaguered troops in Boston.  The sheer audacity and creativity behind his plan impressed General George Washington.  On paper, the plan sounded simple- move guns from Fort Ticonderoga to Boston.  But, the proverbial devil seeps through not only the details such as the logistics of transportation, but also the “human factors” of moving hundreds of miles through inhospitable terrain and weather.

Knox was impressive as a leader for several reasons.  First, the power of his creativity.  He was clearly an outside of the box thinker.  There are anecdotes of his bias for action and creativity to include the fact that he cut ice in the Hudson River in order to allow the water to seep to the surface, freeze, and provide a better platform for moving the heavy equipment on sleds.

As illustrated by his own writings, the physical and mental stress of his journey was significant.  This was a careful, deliberate process of moving over one hundred thousand tons of armaments through grueling winter conditions on make-shift sleds over steep mountains and valleys.  Additionally, Knox had a reputation for being an eloquent speaker, a confident, charismatic young gentleman, and a man whose force of personality carried great influence.

When an 18 pound cannon fell to the bottom of a river near Albany, New York he was able to successfully enlist the help of the locals to retrieve it.  Another powerful moment occurred when some of the men in his party refused to go on.  But, Knox apparently pleaded with them for several hours before they relented, grabbed their sleds, and continued the difficult journey.  As they travelled closer to Boston, throngs of energetic people came out to cheer and yell shouts of encouragement.  Finally, all of the guns taken from Fort Ticonderoga were unloaded at Framingham, Massachusetts.

Finally, the book contains several important and famous battles of the Revolutionary War. The Battle of Long Island is the battle in which Washington’s army was forced to retreat to Brooklyn Heights. After the retreat, the army was able to miraculously evacuate Long Island to Manhattan. The execution of the evacuation is a fascinating part of the book. For more information on the evacuation and the role of a Maryland Regiment in making it successful, check out the interview with Patrick K. O’Donnell, author of Washington’s Immortals: The Untold Story of an Elite Regiment Who Changed the Course of the Revolution

1776 also includes the Battle of Trenton. It is an exciting account of the Continental Army achieving victory over a Hessian garrison at Trenton, New Jersey. Additionally, George Washington’s leadership in this critical battle helped him salvage the army and the hopes of American victory in the war. Enlistments were almost up at the end of 1776. General Washington needed a victory to improve the fighting spirit of his men, and encourage them to re-enlist.

Overall, I can’t recommend a more exciting book of military history to read on Independence Day. This book is one of my all-time favorites.