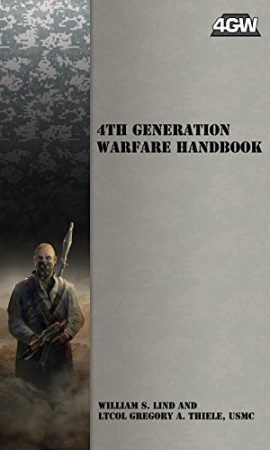 with William S. Lind. The book explores the idea that military history has entered a new generation- the fourth one.

If you’re thinking, “Wait… there were three other ‘generations’ of warfare?” Then you are not alone. I asked Lt. Col Thiele about the other three. He provided an explanation that was interesting.

Listen to the interview!

The Four Generations of Warfare

Lt. Col Thiele claims that before the first generation of warfare, there were simply armed groups that fought each other for different reasons i.e. competition for land, resources, religious principles, etc… This is kind of a free for all type of era. I did not spend a lot of time on this specific categorization. There is no doubt that organized state sponsored armies have been fighting each other since Athens and Sparta. Thus, there is room to debate where Lt. Col Thiele chose to begin the generations. Nevertheless, here is where he starts.

He claims the first generation begins after the Treaty of Westphalia and stretches to the American Civil War. He describes this generation as one in which line and column tactics developed to bring order and discipline to the battlefield. He says the tactics reflect a “culture of order.”

The second generation of warfare is one based on attrition. This is primarily a time in which heavily armed nation states slug it out by trying to throw more men and arms at each other. This generation takes place from the Civil War to World War I. Furthermore, Lt. Col Thiele claims that much of the modern day military mindset is still rooted in this second generation.

The third generation of warfare is one based on “maneuver.” It begins during World War I and thrives during World War II with the German blitzkrieg. This is a type of warfare in which enemy systems are attacked. The enemy strengths are avoided while speed and decisiveness are massed against areas in which they are weakest. Lt Col Thiele mentions John Boyd as someone who recognized this generation and this style of maneuver warfare.

Lt. Col Thiele suggests that we are in a new generation in which traditional state on state wars are becoming relics of the past. The idea is that the fourth generation is a type of throw back to the days prior to the Treaty of Westphalia. The only difference is that the state is now engaged with non-state actors. As a result, Lt. he refers to this era as a “devolution of warfare” or the “democratization of warfare.”

This idea of “democratization of warfare” is an interesting one. In some ways, it can be seen evolving with the rise of new technology such as communications via the Internet, which connects billions of people and allows for groups to spread their ideology and mobilize support. Social media platforms like Twitter were designed to give everyone a voice and a platform. We have seen the way in which terrorist groups like Al-Qaeda and ISIS have skillfully used these technologies to their advantage.

As a result, I think that Lt. Col Thiele’s idea of the “democratization of warfare” is extremely thought provoking. It is also validated by recent history.

This is a critical part of 4GW, and one in which the two authors focus much of their time. Line infantry refers to conventional infantry tactics. Lt. Col Thiele uses the word “open space” in reference to it. This is basically uniformed conventional infantry forces fighting other uniformed forces with tanks, air support, and massive amounts of logistics in support.

Light infantry takes place on a different battlefield that has more complexity and nuance. These units need to be more “self-reliant” and must have a smaller logistical footprint. Furthermore, the use of violence is more selective and calculated. Also, light infantry uses the ambush more than close air support and artillery.

The idea of the light infantry is not a new idea. However, Lt. Col Thiele has refined it based on observations from recent history with the wars in Iraq and Afghanistan. This type of fighting is one in which infantry units spend more time working with local populations, building goodwill, gathering intelligence, and then finding the right place and time to strike the enemy with swift violence.

Who is made for Fourth Generation Warfare?

As opposed to line infantry, light infantry seems to model the special forces. In our interview, Lt. Col Thiele suggested some similarities. Clearly, light infantry forces have to be more specialized and selective. Whoever joins these units will have to be physically tough, mentally resilient, and morally squared away.

However, this type of fight is not for everyone. The training demands a lot of hiking and extreme physical endurance. Additionally, light infantry training needs to incorporate free play to foster decision making against a real, thinking enemy.

These types of fighters will also have to be patient and disciplined. This means they will need to go long periods of time without access to Instagram and Snapchat. I know what you are thinking, “Where will America find such strong men?” Hopefully among the listeners of the PME Podcast!

Additional interviews related to this one include the following:

My interview with B.A. Friedman On Tactics

Also, my two interviews with Maj Ian Brown on John Boyd and maneuver warfare. Here is Part 1 and Part 2 of those interviews.

In 1989, Bill Lind published an article called The Changing Face of War: Into the Fourth Generation. This was initially published in the Marine Corps Gazette. Thirty years later, the article remains relevant and worth reading.

There are seven books. These appear in an appendix of 4GW Handbook. They are as follows:

1. The Enlightened Soldier: Scharnhorst and the Militarische Gesellschaft in Berlin, 1801-1805

5. The Breaking Point: Sedan and the Fall of France, 1940 (Stackpole Military History Series)

7. The Transformation of War: The Most Radical Reinterpretation of Armed Conflict Since Clausewitz