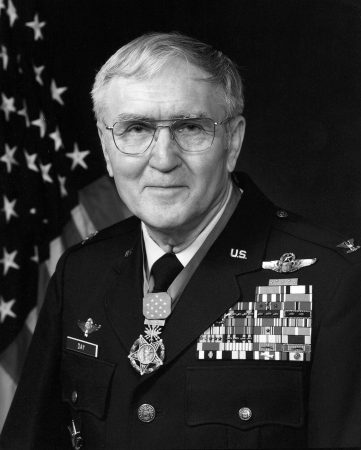 Robert Coram is the author of an excellent biography called American Patriot: The Life and Wars of Colonel Bud Day

Colonel Day is a larger than life figure. He is one of the most decorated veterans in American military history. This interview with Mr. Coram spans the course of Colonel Day’s life from his small-town upbringing in Iowa to his service as an Air Force pilot and prisoner of war (POW) in North Vietnam.

Colonel Day is best known for his time during the Vietnam War because he was shot down and imprisoned in the infamous Hanoi Hilton. In fact, he was cellmates with the late Senator John McCain. The two men served as POWs for five years until their release in the Spring of 1973. As a result of his steadfast commitment to resisting and upholding the Code of Conduct, Colonel Day was awarded the Congressional Medal of Honor in 1976 by President Gerald Ford.

A recurring theme of Colonel Day’s legacy is honor. Colonel Day constantly repeated the phrase “return with honor” while being tortured by his North Vietnamese captors. This interview examines the core value of honor through the life and legacy of Colonel Bud Day. Robert Coram says that he was personally honored to have spent two and a half years with Colonel Day while writing the biography of his life. In talking to Mr. Coram, it was clear that he was greatly influenced by Colonel Day. I have no doubt that many other people will be influenced by the life and legacy of Colonel Bud Day, a great American Patriot.

Check out the book and the other biographies written by Robert Coram:
American Patriot: The Life and Wars of Colonel Bud Day

Boyd: The Fighter Pilot Who Changed the Art of War