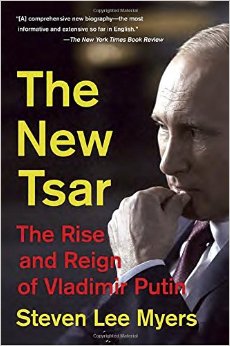 At the beginning of Steven Lee Myers’ book The New Tsar: The Rise and Reign of Vladimir Putin, there is a quote about Putin’s love for the martial arts that seems to foreshadow the future Russian president’s foreign policy attitudes. Myers writes, “The martial arts transformed his life, giving him the means of asserting himself against larger, tougher boys.” I immediately wrote “NATO” and “the West” on the margin of the page. In many ways, this theme dominates Myers’ assessment of Vladimir Putin. In this well-written biography, the Russian president appears to have a perpetual chip on his shoulder. What emerges is the portrait of a distrustful, brooding autocrat, whose political career has been built on standing up to Russia’s external enemies both real and imagined. Although Putin initially appeared to represent a glimmer of hope that the post-Soviet Union reforms of the 1990’s would continue, these hopes quickly eroded in his first term as president. Putin’s decisions to consolidate the authoritarian power of the state, crackdown on political dissent, and ultimately violate the sovereignty of an independent nation would be influenced by many significant domestic and international events to include Russia’s war on terrorism, perpetual disagreements with western leaders, the struggles of an economy closely tied to the fluctuations of oil and gas prices, and a new ethno-nationalist Eurasian ideology.

Mr. Myers’ biography begins with Putin’s time as a KGB agent. During his KGB career, he was stationed in Dresden where he was tasked with gathering “intelligence and recruiting agents who had access to the West.” Several key points from Putin’s KGB experience relate to how the collapse of the Soviet Union made him deeply skeptical of what he saw as “mob rule” in the political turmoil that unfolded. With this experience branded into his consciousness, the author wants to show how Putin’s overall contempt for democracy is tied to his fear of mob rule.  As a bureaucrat, prime minister, and president, Putin believes fundamentally in the power of the state and prioritizes it over the will of the people. Furthermore, under Putin, Russia has become an anti-democracy that poses as a democracy. There is a “contract” between the people and the state in which the state offers security and stability, but the people must not criticize its actions in pursuit of that goal. Putin’s rule is not totalitarian. It is autocratic, and most Russians have learned to accept it.

Considering Putin’s deep distrust of western style democracy, it is easy to understand why events like Ukraine’s 2004 Orange Revolution were upsetting to him on a personal level. Furthermore, this incident fueled Putin’s theories that America was to blame for the political movement as part of the Bush doctrine to promote democracy throughout the world. Blaming America for political instability continued even into Putin’s 2012 return to the presidency when he thought Hillary Clinton and the State Department instigated protests in Russia. Furthermore, one can clearly see that Putin’s anti-democratic attitude accounts for the stark foreign policy differences between Russia and the United States. Myers writes “there existed a dark association in [Putin’s] mind between aspirations for democracy and the rise of radicalism.” This illustrates why Putin opposed America’s overthrow of Saddam in Iraq, the overthrow of Qaddafi in Libya, and why he has fought against attempts to overthrow Bashar al-Assad in Syria. When it comes to governance, Myers asserts that the Russian president believes that “people cannot be entrusted with the power to choose their own leaders except in the most carefully controlled process.”

The New Tsar also contains details on Russia’s war on terrorism and the war against Chechen insurgents. When Putin became prime minister, there was a brutal war taking place in Chechnya. Putin’s popularity among Russian citizens soared due to his handling of the war, which was characterized by “banging the hell out of the bandits.” This also hardened Putin’s stance towards America and Europe as international pressure was placed on Russia for human rights abuses and suspected war crimes. As the war in Chechnya raged, Russia faced its own war on terror with a string of apartment bombings in multiple cities, which claimed hundreds of lives and wounded over a thousand citizens. These bombings were followed by the Moscow Theater siege in October 2002. Then nearly two years later, Russia suffered the horrific hostage crisis at School No. 1 in Beslan, a small town in North Ossetia. These dark events strengthened Putin’s determination to consolidate the power of the state for security reasons. Myers concludes that Putin was not nostalgic for the Soviet Union as it was dominated by the Communist Party, but he writes that “Putin seemed to blame the siege in Beslan on Russia’s inability to preserve the strength that made the Soviet Union he remembered as a boy so strong and respected.”

Myers book digs into high-profile events such as the “Yukos affair” in which Putin ultimately imprisoned Russia’s wealthiest man, Mikhail Khodorkovsky, for what Myers concludes was the crime of being “the wrong kind of oligarch.” The book details several of the most notorious suspected assassinations to include that of journalist Anna Politkovskaya and Aleksandr Litvinenko. Myers provides useful facts and anecdotes related to Putin’s handling of political dissenters particularly with the case of the Pussy Riot group. Other notable moments of the biography include the issues surrounding the planning and development of the 2014 Winter Olympics in Sochi. Also, Myers includes the most recent international dust-ups with the U.S. over Edward Snowden and the Obama administration’s “red line” in Syria.

Finally, the book closes with the war in Ukraine and the annexation of Crimea. Myers explains the skillful way in which Russia blended hard and soft power to influence the events in their favor. The use of irregular warfare tactics to include the infamous “little green men,” information operations and cyberattacks was done in a manner that gave Russia deniability. Ultimately, Putin’s objective was to reassert Russian influence and to halt NATO expansion, which Putin continually fears is creeping closer to Russia’s border. Myers explains that Ukraine holds significant historical meaning for Russians. The attempt to reconsolidate Ukraine within the Russian sphere of influence is part of what Myers calls Putin’s Eurasian ideology. Thus, what we have witnessed with the rise and reign of Vladimir Putin is the emergence of an ideological hardliner who sees himself as the leader of a broad pan-Eurasian Union that is committed to countering the ideas and influence of the West. While this may serve Putin’s political interests at home, it has left the world with renewed tensions eerily reminiscent of the Cold War. That is where the book ends, but follow-on editions would likely include the conclusion by seventeen U.S. intelligence agencies that Russia deliberately meddled in the 2016 U.S. Presidential elections. After reading The New Tsar, the reader can see that the hacking and leaks intended to create uncertainty and division in the U.S. electoral process have the specter of Vladimir Putin all over it.