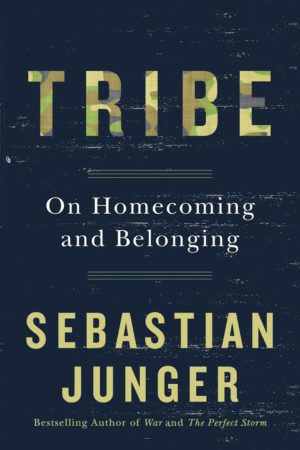 Sebastian Junger is known for writing The Perfect Storm and his documentaries Restrepo and Korengal. His most recent book, Tribe: On Homecoming and Belonging, was the most important book published in 2016. The provocative ideas and uncomfortable questions raised in this book need to be taken seriously. Let’s begin with some context and consider the fact that modern American society despite its increasing affluence, safety, and technological connectivity has higher rates of depression, suicide, and chronic loneliness than at any other time in our history. Additionally, the amount of partisanship and vitriol in our deeply divided politics has created a shrill environment in which the dehumanization of political opponents makes our society appear fractured with hate. Let’s go further, imagine you were a soldier or Marine deployed to Iraq or Afghanistan in 2008 during the financial crisis. Imagine returning to a country in which a small handful of bankers recklessly gambled away trillions of dollars in wealth causing the single greatest financial crisis since the Great Depression while you were risking your life for your country. To date none of these bankers has been held accountable for their actions, and most paid themselves enormous bonuses. Seems like capitalism for the rich, and socialism for everyone else, right? Imagine you are a veteran who has deployed with close friends and lived and trained together for years in austere, inhospitable places. So now you are returning to a society with social isolation, greed, reckless individualism, and economic uncertainty. But, more importantly, for veterans trying to reintegrate into American society, they have lost the intense camaraderie and sense of purpose that they felt while living, training, and deploying with their closest friends for some of the best years of their young adult lives. As Junger concludes, there is clearly something greater than “PTSD” affecting the lives of returning veterans.

Amid this backdrop of veteran reintegration into American society, Sebastian Junger asks why so many veterans without combat experience are claiming PTSD. There are obviously a few “bad apples” who take advantage of the system and claim benefits that they don’t rate for the sake of life long compensation. Unfortunately, these greedy individuals do immense harm to the veterans who are legitimately suffering from PTSD. There is no doubt that many veterans have experienced shock, emotional, and physical trauma from combat experiences during their service. Junger explains that this accounts for instances of “acute PTSD,” which makes sense from an evolutionary point of view. Human beings who have experienced the trauma of combat are more likely to react to loud noises, sleep on edge, feel uncomfortable in close spaces, and have flashbacks. These acute PTSD symptoms remain with people as mechanisms for survival. It is completely natural and not abnormal at all. Nor is there anything “weak” about an individual who feels these symptoms. It is simple evolutionary science. Thus, this type of acute PTSD can be treated, and its effects can go away over time. What is being seen in many veterans today is something different. Long term, chronic PTSD seems to be an entirely different phenomenon and its origins appear to be rooted in something different from combat stress. As I stated, Junger points to issues such as reintegration into American society as part of the problem. Furthermore, he claims that “the trauma of war seems to be giving it up.” This point is interesting. As an anthropologist and social scientist, Junger studies cultures and societies that have been affected by wars and natural disasters. He cites numerous studies that point to the “positive” mental affects that these conditions can have on the psyche of individuals. For example, Londoners during the German blitz did not panic in hysteria. To the contrary, they developed their own sets of law and rules to police themselves and maintained a tough resolve to continue living their lives in the face of danger. As a more modern example, Junger points to the fact that after 9/11, crime rates decreased dramatically in New York City along with rates of depression and suicide. In societies that have been afflicted by earthquakes and landslides, the aftermath brought egalitarianism and social solidarity that made the society i.e. “the tribe” bond together in a close-knit manner. This is the essence of the tribal benefits that Junger is talking about. Challenges and hardship can bind a society and bring people closer together in a common cause.

But, there can also be a dark side to the tribe. The fact that challenges and war can bring people closer together does not mean that nations should be seeking wars, enemies, or natural disasters to give society social solidarity and make their nation bond together. Although, this is done consistently in American politics as political parties create enemies and designate groups of people as the insidious “other” to galvanize voters by pandering to their fears. The 19th century German philosopher Friedrich Nietzsche once said, “A good war makes any cause sacred.” It’s worth remembering that most conflicts are manufactured by people with an agenda namely money and power, and they use fear to rally the tribe. The benefits of tribalism are not worth creating conflicts and enemies. That would be the worst conclusion to take from this book. However, the important part of this book is to recognize that even though modern society possesses so many benefits to include wealth and relative safety, there is still a natural, tribal longing that is hardwired into human consciousness. On this point, Junger has an interesting chapter on European colonial settlers defecting to live with Indian tribes on the American frontier. He points out the fact that even though many of these settlers chose to live in Indian society, there were very few examples that this worked the other way. The number of people who “went native” was disproportionate to those who “went civilized.” Indeed, the latter hardly happened.

Why else are Junger’s conclusions important? Think of some of the terrible acts of violence that exist in the world today to include mass shootings and westerners being recruited to fight for ISIS. There is a similar pattern here. In most cases, there are upper class, affluent young men that feel a sense of social isolation and boredom. They are drawn to violent images and videos for stimulation, and more importantly, they are susceptible to the propaganda of joining a cause greater than themselves that promises in real-time the same stimulation that they get online. Again, another dark side to recognize about the allure of the tribe. The tribe can also forgive atrocities against people it feels are heretics, infidels, or social pariahs. People in the tribe can easily lose their humanity, and forgive the most heinous crimes. It is important to recognize these negative dynamics of tribalism, and I feel like Junger could have done more to explain this. Although he does mention some of the inherent problems with tribalism, he doesn’t elaborate with the same detail.

Returning to the issue of America’s veterans, a lot of them return to civilian life realizing that they miss the experience of combat and non-combat based deployments. There is a terrible stigma about people who “miss war.” It must feel weird and socially isolating for a person to have nostalgia for a war. But, Junger makes it clear that humans are not yearning for “war” because they like death and violence. On the other hand, it is the camaraderie, close bonds, and shared hardship that war engenders which makes people nostalgic for it. Veterans return to society to go back to school and find jobs, yet they can never get back that sense of brotherhood and the deep bonds that existed between them and their closest friends. This happens to veterans who deployed to combat and those that never saw combat. In my own experience, I have had two non-combat deployments with a lot of Marines that never went to combat. A lot of these Marines get out of the military, and what I hear is that after the initial rush of “freedom” wears away, most of them miss their military experience more than they thought they would and in some cases, look for ways to get back in. However, for most veterans, getting back in the service is simply not possible. But, this isn’t a case for despair. As Junger explains there is a concept called “the self-determination theory” and it has three components that give individuals- veterans and everyone else-  a sense of meaning and purpose in life. First, individuals want to feel competent at what they do. Second, they want to feel authentic in who they are. Third, they want to feel connected to others. These are all intrinsic values that determine happiness. American society through economic and marketing forces has “put consumption ahead of long-term happiness.” People can make millions of dollars, and yet if they lack these three things, they will not be happy. They will be prescribed anti-depressants and vent to a therapist (not that there is anything wrong with therapy). After reading this excellent book, it is clear the best way to help our veterans and improve our society is to promote a culture in which these three self-determining factors are priorities. How does this happen? Sebastian Junger doesn’t have all the answers (he has some suggestions). But he puts the question in the reader’s head, and that is the best way to start an important conversation.

Additional References and Resources:
Thomas Paine’s Agrarian Justice: PDF Link
Emile Durkheim is mentioned in the book. Here is a link to his Wikipedia page as a very general resource to learn more about him.
Karl Marlentes is mentioned. He is the author of Matterhorn: A Novel of the Vietnam War

and What It Is Like To Go To War

Both are good books.