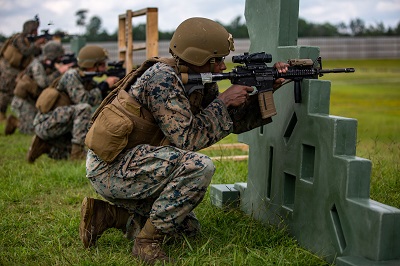 In this episode of the PME Podcast, I interview Master Sergeant Joel Reilly (USMC) on combat marksmanship. Joel is a friend of mine. We first met in 2012 during Infantry Officer Course (IOC) in Quantico, VA. As he explains in the podcast, he attended the course on behalf of his schoolhouse, Infantry Unit Leaders’ Course (IULC). The goal was for the platoon sergeant instructors to learn what platoon commanders were learning at IOC.

Throughout his career as an infantryman and infantry leader, he learned the principles and fundamentals of marksmanship. We discuss several of those principles in the podcast. I like to try to mix in tactical episodes with  strategic interviews. This one is similar to the interview with SSgt Chad Skaggs (USMC). These two Marines are some of the most proficient infantry leaders that I know.

The Evolution of the Marine Corps Combat Marksmanship Program

As Joel explains, the Marine Corps has a strong marksmanship program. However, it has had to evolve to keep up with operational requirements. But, the building blocks of marksmanship remain the same. They are: aiming, breathing, trigger control. A few of the other principles mentioned are sight alignment and sight picture. This refers to properly aligning the sight with the target. Also, the sight picture should be clear and there should not be any scope shadow.

As Marines were deploying overseas, it became apparent that the program needed to change. Many of the engagements were being done in close quarter environments such as Fallujah and Ramadi, Iraq. Marines needed to be proficient in these close in engagements and also train to fight with their gear and equipment on. Additionally, they had to be able to engage targets at night with Night Vision Goggles (NVGs) and also at unknown distances.

As a result, several new tables of fire were created that focused on marksmanship during the day and night at close range and with gear on. The Marine Corps also added an unknown distance shoot for both day and night.

The new Annual Rifle Qualification (ARQ) will change for Marines. It will integrate many of the principles discussed in the podcast. For example, gear will be worn. Furthermore, the scoring will be assessed based on shots hitting “vital areas.” Also, it is authorized to use bipods, magazines on the deck, and an assault pack for support. To learn more about the AQR changes, check Marines.mil and an overview here.

The new programs scoring system will be based on shots to the vital areas or lethality zones as depicted.

In the interview, Joel mentions the evolution of weaponry and the development of the M27 Infantry Automatic Rifle (IAR). This led to a discussion of accuracy. The Marine Corps used to debate whether suppression was volume of fire or accuracy of fire. Ultimately, accuracy won at the squad level. The IAR does have a fully automatic capability. It also has a free floating barrel, adjustable buttstock, and holds a tighter group with a 1″-2″ minute of angle (MOA).

In our conversation on ballistics, Joel mentions yaw. Here is an illustration of yaw. The bullet moves up and down like a poorly thrown football. The damage done will depend on what angle the bullet strikes the target. The velocity of the round will impact the extent to which the bullet will yaw. So as the bullet loses velocity it will yaw more. 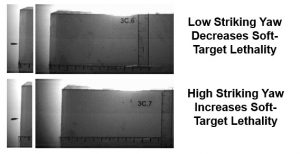 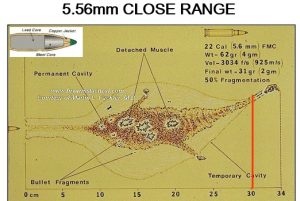 How to Train on a “Shoestring Budget”

The answer is weapons manipulation. Joel advocates for magazine reloads, presentation drills, and gun drills for crew served weapons. On non-live fire training, he says, “You better put hours and hours of that in. Ammo is a confirmation of what has been done in training.”

He advocates the following: Practice speed reloads, tactical reloads, clearing stoppages. Do it with gear on. On the topic of gear, Joel speaks about typically setting up magazines on the support side. The goal is to try to keep the shooter’s hand on the pistol grip at all times. Another tip he mentions is at a minimum having one speed reload pouch. However, he discusses his personal preference to keep all of his magazines as speed reload pouches.

A speed reload is done as fast as possible. It is done on the enemies time. On the other hand, a tactical reload takes place during a pause in the fight. It happens when the shooter has time.

While the basics and fundamentals of marksmanship training do not require a lot of money, there are some interesting technological developments. We joked about the Microsoft-Army contract for HoloLens AR headsets. According to CNBC, its a contract valued close to $22 billion.

It was great to interview MSgt Joel Reilly. He is a true professional and someone that has trained a lot of Marines to be more lethal to fight and win our nation’s battles. I am glad he agreed to a fun and informative interview.

Link to the website mentioned with Marine Corps publications

American Sniper: The Autobiography of the Most Lethal Sniper in U.S. Military History

The Reaper: Autobiography of One of the Deadliest Special Ops Snipers

On Combat, The Psychology and Physiology of Deadly Conflict in War and in Peace

This site uses Akismet to reduce spam. Learn how your comment data is processed.