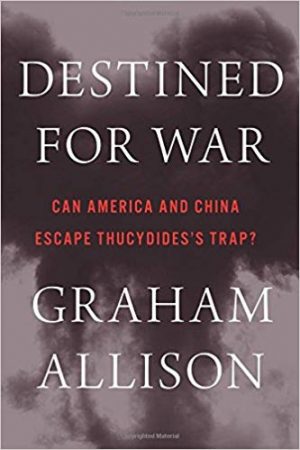 “It was the rise of Athens and the fear that this instilled in Sparta that made war inevitable.”

Is America destined for war with China?

Dr. Graham Allison poses the question in the subtitle of a book called Destined for War: Can America and China Escape Thucydides’s Trap?

. If you’re like me and you’re asking what the heck is a “Thucydides’s Trap”, then I am sure you’re not alone.

Thucydides is the godfather of history. He’s kind of a big deal. He wrote about the Peloponnesian War that took place between Athens and Sparta in the Fifth century BCE i.e. a long time ago in a galaxy far, far away. Most people probably know more details about the last season of Game of Thrones than Athens and Sparta. Even though the Spartans were super badass, I don’t think Thucydides mentioned anything about dragons. But while George R.R. Martin is a good writer, he is not the father of history. Thucydides will take that title because he wrote about the conflict and helped provide the framework for some theories of power and politics such as realpolitik. So for all political science students, you’re freakin’ welcome!

In his “Melian Dialogue” Thucydides wrote the classic line, “In the real world, the strong do what they will and the weak suffer what they must.” Boom! I’d like to see the HBO writers pull that one off. In one sentence, Thucydides gave military historians intellectual red meat to devour for years.

At the core of Dr. Allison’s book is the theory that the U.S. and China are destined for the same fate as the Athenians and the Spartans. The Spartans were threatened by the rise of Athens. As a result of distrust and diplomatic breakdowns, the two nations eventually went to war.

In the modern sense, the U.S. is the entrenched power (i.e. the badass Spartans) and China is the rising power (i.e. the upstart Athenians). It is important to understand that he is not suggesting that the nations are similar in terms of politics or culture. After all, Athens was a democracy. On the other hand, China surveils its citizens, blocks their Internet access, and slaps them with Uber-style social ratings. Meanwhile, Sparta was a warrior culture where mothers told their sons, “Come back with your shield or on it.” I guess the Spartans never heard of safe spaces. American kids are given cell phones and anxiety pills, and mothers tell them not to sit too close to the screen playing video games. Kind of different there…

“Since the Great Recession, 40 percent of all the growth around the world has occurred in just one country: China.”

China’s economic rise over the last thirty years has been incredible. In fact, it has averaged at least 10 percent a year since 1981. For whatever criticism exists about their style of government and economy, they have succeeded in “lifting more than half a billion people out of extreme poverty.” Additionally, China’s middle class and consumer economy is beginning to show strength. They are spending boatloads (a quantifiable # btw) of money on research and education in areas of STEM (science, technology, engineering, and math).

Additionally, they have more room to grow. Dr. Allison cites the productivity gap between American and Chinese workers. American workers are currently four times as productive as Chinese workers. However, if China can close the gap over the next ten years then China’s economy will become four times the size of America’s. Sounds like America needs to send Chinese laborers X-Boxes, potato chips, soda, and La-Z-Boy sofas ASAP.

The book contains an interesting look at President Theodore Roosevelt. President Roosevelt had a clear vision for American expansion, power, and dominance. He had grandiose ideas for America’s economic and military might not only in the Western Hemisphere but abroad. More importantly, he helped America become a world power.

Thus, Dr. Allison wants the reader to ask, “What if China had a Theodore Roosevelt of its own?” What would that leader be like?

Xi Jinping doesn’t look like a Rough Rider charging across the badlands on a horse shooting pistols with a cowboy hat, but let’s not underestimate people. The book points out that the current Chinese leader has a vision of Chinese greatness and supremacy. He may not be charging San Juan Hill, but the dude thinks that China has something akin to their own manifest destiny. He’s smart patient, and powerful. He’s developed a strong inner circle and consolidated Chinese politics under the Communist Party.

The chapter about China valuing hierarchy in international affairs is important. Instead of a rules-based international order, they want all other nations to bow and stand in awe of the great Chinese civilization. It seems like it might be hard to play nice with others when you want them to kiss your feet. Just saying… This leads us to the next issue:

Samuel Huntington wrote a book called The Clash of Civilizations. The thesis is that in the post-Cold War era, conflicts are going to become less ideological and more cultural. This idea was controversial in the 1990s so I can’t imagine people are any less offended by it today. But Dr. Allison seems to think it is highly relevant.

The book suggests that around 1900 when America became a world power, the English basically said, “We know you guys are cool.” Same language. Same general political system. Same religion. Etc… There were enough similarities for the British to let it go without too much of a fight.

This decision worked in Britain’s favor. During World War I, the Brits needed America’s back, and we helped. When World War II kicked off, they wanted America in the fight, and we were all in. From there, a “special relationship” developed that has sustained the post-war and modern-day alliance between the U.S. and Britain.

Could something similar happen between the U.S. and China?

Again, the author returns to some of the political and cultural differences. It’s not that it can’t happen. However, it seems less likely. Furthermore, the U.S. has made overtures to the Chinese and tried to include them in the U.S. version of world order with varying degrees of success.

To show just how unlikely it is for the two nations to become strong allies, Dr. Allison suggests that it would take an Alien invasion from outer space. Sound insane? Well, there is a historical precedent for this. Apparently, President Ronald Reagan suggested to Mikhail Gorbachev that if little martian men from Mars attacked Earth, the two nations would become fast friends.

Pending the arrival of any non-Russian little green men, Dr. Allison’s point is that there are major issues facing humankind that could cause the U.S. and China to set aside their differences and work together. Among them are climate change and threats of terrorism. The point is that if the two world powers can find a common enemy like space invaders or global warming then in theory tensions should ease.

The authors call to action is a tough one. He is suggesting that American politics become less polarized and that politicians start thinking long-term. Cue the laugh track…

Have you caught your breath yet? His point is a bit somber here. He thinks that American political leaders need to take strategy seriously, but probably won’t. Nevertheless, that is the solution.

The reality is that China does think in terms of generations and not election cycles. If the U.S. could start projecting poll numbers from our great-great-yet to be born grandkids then maybe that’s our best shot. We’ll see. My guess is that Elon Musk and Jeff Bezos will be living on Mars by then. Of course, then they can raise armies to invade earth. In turn, the earth will have its alien invaders to bring the U.S. and China together and avert war just in the nick of time. And now you know why SpaceX really exists…

As the U.S. and Chinese trade negotiations remain ongoing, as protests break out in Hong Kong, and while China continues to build artificial islands in the South China Sea, this book becomes more relevant each day. It combines my favorite qualities of history books- relevant information, interesting facts for cocktail parties, cool statistics, and most importantly, not too long!