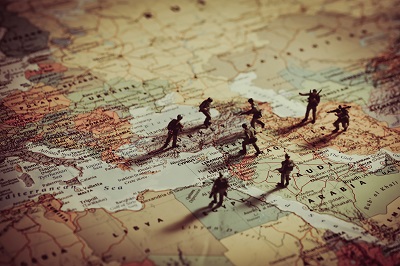 Alexis De Tocqueville was a French political scientist, who published two volumes of Democracy in America in 1835 and 1840. The book is widely regarded as a seminal work in American political science. De Tocqueville wrote in the post-Napoleonic era in which military strategy shifted into the type of brutal warfare that we witnessed in the first half of the twentieth century. That is the transformation of entire societies into war machines. The strategy for winning meant employing masses of troops on the battlefield to achieve significant results. As the industrial revolution expanded the destructive capability of weaponry, the wars from De Tocqueville’s era through the Twentieth Century were the bloodiest in the history of mankind. With this historical context, we examine Alexis De Tocqueville’s theory that democratic armies are “desirous” for war while democratic societies prefer peace.[i]

In many respects, De Tocqueville described what seems obvious, that military service provides substantial opportunity for social mobility and long-term economic benefit. Indeed, active military members receive innumerable benefits such as good salaries, pension plans, cheap housing, free health care, discount services, and many on base amenities. Veterans also receive exceptional benefits to include educational benefits like the post-9/11 GI Bill. None of these benefits appear to be at risk anytime soon. Politically, the military is virtually untouchable. Any politician proposing cuts to the defense appropriations budget does so with trepidation. Defense cuts are like a political hot potato. In contrast to today’s massive defense industry and appropriations budget, De Tocqueville wrote Democracy in America at a time in which the American military was relatively small, and did not have nearly the influence that it has today. Therefore, it is important to look carefully at the part of De Tocqueville’s thesis that democratic armies are “desirous for war.” If this is true, then considering the nearly invincible status which the military maintains today then it would seem to create a significant crisis to our democratic society, which, per De Tocqueville, should be desirous for peace.

De Tocqueville continued his examination of democratic armies by claiming that they are “often restless, ill-tempered, and dissatisfied with their lot.” He explained that a soldier may feel himself in an “inferior position” which creates the potential to “stimulate his taste for hostilities.” In the present era, there is often significant confusion over why morale may be low during times of peace. This is not to say that morale does not suffer during war due to long deployments and extended time away from family. But, one would expect morale to be high in a peace time military. However, if a soldier or Marine spends most of their service training to fight, their morale may suffer when they do not get the opportunity to do what they trained to do. This is like a doctor spending their entire life in medical school, but never actually treating patients. People receive training in multiple professions with the expectation of doing what their job. In peace, democratic armies still want the opportunity to do their job. This is a slightly different interpretation of De Tocqueville who argued that it was social mobility, acquisition of property, and a sense of importance that made democratic armies desirous for war. There are elements of that sprinkled into the conclusion which I have stated namely that the average Marine and soldier, especially in the combat arms professions, want to do their job.[iii]

I mentioned how in the post-Napoleonic era, warfare changed significantly. Men became as indispensable as machines in a giant strategy of attrition. But, the twenty-first century battlefield has evolved significantly, and military doctrine has moved away from attrition. Masses of troops are no longer needed to achieve strategic victories. As such, the civilian population does not need to fear mobilization on a large scale. Instead a handful of volunteers can do the fighting its nation requires. Within the military, an even smaller number of soldiers and Marines do the actual close combat fighting since most military members occupy support roles and many never deploy. Thus, De Tocqueville’s argument that democratic societies would have to constrain the aggressive tendency of democratic armies made sense in the early nineteenth and twentieth centuries. But, in the beginning of the twenty-first century, there has been a paradigm shift.

Furthermore, the paradigm shift has become more pronounced in the global war on terror (GWOT). In fact, GWOT has thrown De Tocqueville’s thesis upside down. To effectively prosecute this “war”, a smaller number of service members are needed, and they do not always have to be conventional forces. With the Iraq War, conventional forces were used extensively. Nevertheless, the Iraq War is being viewed retrospectively as bad GWOT strategy. Since the invasion produced significant sectarian violence, fueled a Sunni-based terrorist movement and allowed Iran to increase their proxies, the logic and effectiveness of nation building strategy is being re-examined. Nevertheless, nation building was never fully embraced by the military in the first place. Before the Iraq War, high ranking former military members were often its most vocal critics. For example, former Commander in Chief Central Command (CENTCOM), Marine General Anthony Zinni objected to the Bush Administration’s decision to invade Iraq. Furthermore, the neoconservatives who sought to reshape the world in the image of western, democratic models of governance were all civilians. Additionally, when the decision to invade Iraq was made, these civilians pushed for a “light footprint” strategy even as some military commanders were wary of this approach. For example, Army Chief of Staff, General Eric Shinseki made the case that the post-invasion force would necessitate several hundred thousand more troops than what Rumsfeld and his deputy Paul Wolfowitz were advocating. At the same time, the American population favored war in Iraq and congress voted for it. The point is simply that Iraq was a war of choice made by civilians representing the interests of democratic society. To make matters worse, the military was handed the blueprint for executing that war of choice by the same civilians.[iv]

De Tocqueville said, “No protracted war can fail to endanger the freedom of a democratic country.” America has been living the last decade and a half in the shadow of the GWOT. During this time, American democratic society has made a lot of sacrifices with respect to personal freedoms and privacy rights. To prevent another 9/11, Americans have become comfortable with giving up some personal freedoms. Under GWOT, U.S. foreign policy has been highlighted by two conventional wars, a permanent detention center in Guantanamo Bay Cuba, the overthrow of an African dictator in Libya, and intensification of a drone war without congressional authorization, yet none of these actions have been due to the influence of a “democratic army.” In fact, we are now seeing a shift in which former military commanders most notably Secretary of Defense James Mattis, another former CENTCOM commander and Marine General, appear to be pursuing reasonable strategy over the warlike instincts of democratic society. Today’s generation of military leaders are in a unique position. They have seemingly outsized influence, yet without ideological crosses to bear. This appears to be the case with Secretary Mattis, who stands apart as a rare non-ideologue in Washington. As concerns were raised over military influence in the current cabinet, they fell on deaf ears. With the aforementioned paradigm shift and the current state of GWOT, the military has shouldered the burden of restraining the impulses of its citizens.[v]

How is it that the military has inherited this responsibility? Military education and training has produced and continues to produce military leaders with practical and strategic mindsets, problem solving abilities, and disciplined planning methodologies. Military thinkers are taught to observe and appreciate the complexities of different scenarios, and to understand that there is not always one absolute answer. Nuance is part of the problem set. This is different than the strategic thinking of De Tocqueville’s era in which problem sets involved one solution: Throwing more bodies at the problem. The best military strategists of De Tocqueville’s era were the ones who could get the most bodies to the battlefield before the enemy could get more of his bodies there. Therein lies the problem which American society has not figured out. War in the twenty-first century is not solely reliant on masses of tanks streaking across the desert or masses of bodies being thrown at a beachhead. American society only understands war through the lens of television, movies, and commercially successful books about the glory of battles. American democratic society does not have to take martial studies seriously because most of its citizens will not be affected by the good or bad decisions that are made. Therefore, war becomes just another reality TV show. It becomes another consumer product. It becomes no more real to the lay person than a video game. They don’t understand the consistency of its nature and the shifting of its character.

De Tocqueville was right that our military members, particularly senior members have earned a significant amount of prestige, social status, and even modest wealth. He was right that they want to do their jobs. But, they want to do them for the right reasons and under the right strategy. Inevitably, armies at peace will be restless and want to do what they have been trained to do. Nothing will change that. But, military professionals who have trained their soldiers and Marines for years can appreciate the value of young lives in a way that civilian society cannot. If there is any force of restraint, it would be from the military commanders who do not want to commit the lives of servicemen and women to a bad strategy because of a public opinion poll. De Tocqueville had a lot of important insights, but we need to reassess some of his conclusions in the twenty-first century, and re-think who in a democracy is truly desirous for war and why.