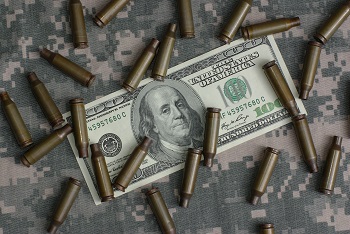 War and money. Often the latter leads to the former. The desire for money and resources can be a cause of war. But, the topic of financial power as a tactic of warfare is an interesting one to study.

In the podcast interview, the Honorable Juan Zarate, explains how the United States Treasury Department has used financial power to achieve national security objectives. He speaks after having many years of experience serving at the U.S. Treasury.

Juan was working at the U.S. Treasury before and after 9/11. In the aftermath of 9/11, the Treasury Department deployed a number of tactics to track terrorist financing. The goal was to “follow the money” to disrupt the networks funding groups like Al-Qaeda.

He began his career as a lawyer and worked at the Treasury Department under the Office of Enforcement prior to 9/11. He was the first-ever assistant secretary of the treasury for terrorist financing and financial crimes. In this capacity, he hunted terrorist financing and also Saddam Hussein’s assets after the invasion of Iraq.

From 2005 to 2009, he served as the deputy assistant to the president and deputy national security advisor for combating terrorism. During this time, he expanded on his work tracking terrorist financing and looked at using the same tactics more broadly.

Juan published the book, Treasury’s War: The Unleashing of a New Era of Financial Warfare in 2013. He currently serves as chairman and co-founder of FDD’s Center on Economic and Financial Power (CEFP). Finally, he is a global co-managing partner and chief strategy officer of K2 Integrity.

One of the critical developments after 9/11 was the passage of the USA PATRIOT Act. This act contained in it Section 311. Under Section 311 authority, the Treasury Department targeted banks tied to money laundering and illicit activity.

One of the most prominent examples occurred against Banco Delta Asia (BDA), which is a Macau-based bank. The Treasury Department discovered that the bank had ties to North Korea and was providing them access to the global banking system. At the time, North Korea was using counterfeit dollar bills called “supernotes”. They were also involved in illicit activity such as drug and cigarette smuggling.

When the Treasury Department “designated” BDA under the authority of Section 311, they signaled to the market that BDA was a “bad bank.” The market responded by looking at other banking relationships that could be tied to North Korea and re-assessing those relationships. As a result, those banks re-assessed their relationship with North Korea. The domino effect of the BDA designation caused North Korea to lose access to a lot of its banks. Therefore, they lost a significant amount of access to funds.

The Treasury Department continues to use sanctions through the Office of Foreign Asset Control (OFAC). The OFAC designation list is currently over 1,500 pages.

The Office of Foreign Assets Control (“OFAC”) of the US Department of the Treasury administers and enforces economic and trade sanctions based on US foreign policy and national security goals against targeted foreign countries and regimes, terrorists, international narcotics traffickers, those engaged in activities related to the proliferation of weapons of mass destruction, and other threats to the national security, foreign policy or economy of the United​ States.

The Treasury Department used sanctions against Iran. Juan mentions counterparty risk. In this case, business with Iran often entailed the risk of doing business with the Iranian Revolutionary Guard Corps (IRGC). Thus, designations were a tool to force companies to know their customer and counterparty relationships. To this day, companies continue to disclose the discovery of having done business with designated entity. The result can be a settlement that costs millions of dollars.

We discussed the use of sanctions by both Republican and Democratic administrations. In both cases, sanctions were a tool of national security. During the Obama administration, the goal was to drive the Iranian regime to the negotiating table.

Key to the development of the PRC’s military, intelligence, and other security apparatuses is the country’s large, ostensibly private economy. Through the national strategy of Military-Civil Fusion, the PRC increases the size of the country’s military-industrial complex by compelling civilian Chinese companies to support its military and intelligence activities. Those companies, though remaining ostensibly private and civilian, directly support the PRC’s military, intelligence, and security apparatuses and aid in their development and modernization.

This Executive Order prevents U.S. investors from buying Chinese companies that are directly tied to financing the Chinese military. But, how would an investor know that? Chinese businesses do not have the same disclosure requirements.

However, there might be some change on this front too. As recently as December 2020, Congress passed a law to try to force Chinese companies to meet U.S. accounting standards.

“The Holding Foreign Companies Accountable Act” passed with bipartisan support. In the bill, a company that does not comply with U.S. Public Accounting Oversight Boards audits can be de-listed. For example, if Alibaba (NYSE: BABA) does not comply, U.S. stock exchanges can de-list their stock. Investors will know longer be able to buy Alibaba stock on U.S. exchanges.

In national defense, money wields a lot of power. With globalization and technology, the world has become more connected. This presents a new set of challenges and opportunities for the U.S. It is challenging because there are many avenues for a terrorist group or adversary to move money and hide assets. At the same time, the U.S. remains the dominant economy and Wall Street is the hub of international finance. This provides a lot of leverage.

Thus, the challenge moving forward is to retain that position. The Unites States must continue to have a growing economy and be the leader in global commerce. But, this challenge will not be easy as China has and continues to make rapid gains.

In the meantime, the U.S. can continue to use its leverage to set high standards of accountability. U.S. companies and investors should be cognizant of their investments and counterparties. The Treasury Department has enforced this accountability with respect to Iran and North Korea. It seems likely to continue this trend with regard to China.

Check out Juan Zarate’s book: Treasury’s War: The Unleashing of a New Era of Financial Warfare