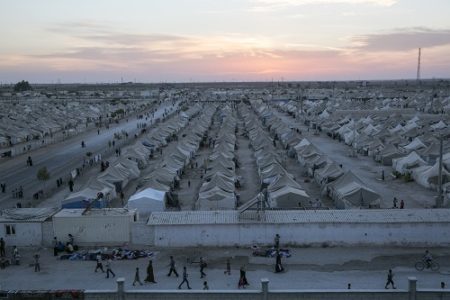 How to Make Safe Zones Work

“Now I’ll absolutely do safe zones in Syria for the People.”[i]

Unlike most military and diplomatic jargon, “safe zones” in the context of the refugee crisis is relatively self-explanatory. These are areas where persons displaced by war can receive humanitarian aid, food, shelter, and medicine without the threat of violence. The idea of safe zones for refugees from Syria and Iraq existed previously in drafts of the controversial Executive Order: Protecting the Nation from Foreign Terrorist Entry into the United States and in President Trump’s own words. However, concerns over safe zones include commitment of troops and escalation of U.S. involvement in the region. Safe zones would inevitably become no fly zones like those created in the 1990s in Kurdish and Shia populated areas of Iraq. The commitment of U.S. troops and military assets would expand dramatically beyond just special operations forces. The number of troops would need to be based on the size of the safe zones or the planned size of the safe zones. If the U.S. were to establish safe zones with roughly 500,000 refugees (this number referenced later), this would require a commitment of several battalion’s worth of soldiers or Marines. As of this writing, safe zones have not received a lot of publicity having been overshadowed by U.S. domestic issues such as healthcare and immigration. Nevertheless, they could become the preferred path to assist with the refugee crisis and create stability in a war-torn region. Indeed safe zones make sense in theory. However, there are multiple second and third order effects and issues to consider in implementation.

The historical precedent for safe zones should be viewed not only in the examples from Iraq in the 1990’s, but also in a British counterinsurgency campaign that took place in Malaya from 1947- 1960. The Malayan case study is one of the best examples of effective counterinsurgency strategy. A component of its success was the establishment of resettlement camps that attempted to cut off ethnic Chinese populations from Communist guerillas. After World War II Malaya was a British colony with an abundance of rubber plantations that drove its economy. An ethnic Chinese population of roughly two million people settled in squatter communities that were influenced by the Malayan Communist Party. The Malayan Communist Party was inspired by the Maoist model of guerilla warfare, which sought to embed themselves within the population to delegitimize the government and ultimately overthrow it. The events in Malaya turned into an “emergency” in 1948 when guerilla terrorist attacks overwhelmed the ability of law enforcement to restore order and provide safety. Ultimately, the military was needed to establish security. However, the initial military efforts were largely unsuccessful as guerilla forces moved through the jungles and population centers to plan, stage, and launch attacks.[ii]

By 1950 the situation had not improved, and the Malaya Federation asked the British government for assistance. The British government appointed a retired Lieutenant General named Sir Harold Briggs as director of operations. Briggs had been General Officer Commander-in-chief in Burma, which provided him with a baseline knowledge on counterinsurgency strategy and operations. With his knowledge and understanding of the situation, Briggs immediately implemented a plan to resettle 500,000 people (hence the number referred to previously) from the Chinese squatter communities into 410 new villages. The idea was to cut the people off directly from the guerillas. Other important actions taken by Briggs included consolidating civil, military, and police into a formal council for planning and policy decisions. This was implemented as the Federal War Council. Additionally, Briggs pushed for greater intelligence work, and sought ethnic Chinese resettlement officers who could be used to engage with the Chinese populations. The establishment of State and District War Committees (SWEC and DWEC) fit the model for operational planning that involved police, military, and civil authorities.[iii]

It is important to understand the impact of SWEC on Malayan counterinsurgency strategy. These committees were designed to make decisions and enact policies on issues ranging from health, safety, and employment in the resettled populations. Representatives were brought together across the broad spectrum of economic, civil, military, and law enforcement agencies. DWEC operated on a smaller scale and was generally composed of a battalion sized military area of operations. Within each district was the same integration of civil and military affairs in which a balance was achieved in planning and execution of operations based on civil-military cooperation.[iv]

The counterinsurgency lessons from Malaya are strong. When analyzing the failure of the U.S. counterinsurgency strategy in Iraq, historians view it as an inability to understand that there is a political and military dynamic to war. The senior editor of Foreign Affairs, Gideon Rose, called this the “Clausewitzian Challenge” in his book, How Wars End: Why We Always Fight the Last Battle. This is a reference to Carl von Clausewitz, the Prussian military theorist who defined war as a violent clash of wills that is political in nature. Rose explains that prior to the Iraq war, military and civilian planners focused exclusively on the battlefield aspects of war, but neglected to plan for the political outcome that followed when the fighting stopped. British counterinsurgency planners in Malaya did not make that mistake. When Winston Churchill was re-elected Prime Minister in 1951, he appointed General Sir Gerald Templer to a post that merged the role of High Commissioner and Director of Operations, which was previously held by Briggs. The effect of this move was to merge the civilian and military colonial leadership into one position. Upon his appointment Templer then combined the military Federal War Council and the political Federal High Council into one entity, and he did so with the following memorandum:

Any idea that the business of normal civil Government and the business of the Emergency are two separate entities must be killed for good and all. The two activities are completely and utterly interrelated.

It is important to note that Templer’s leadership and broader powers did not represent a break from the work established by Briggs. In fact, the goal was to capitalize on the successes of Briggs’s plans by putting in “full operation the machine that Briggs had assembled.”[v][vi]

The Malayan example demonstrates the principle that effective counterinsurgency depends on separating the population from insurgents. This is not always easy when insurgents attempt to blend in as local civilians. However, in Malaya identifying guerillas became easier as operations were decentralized and the military and police cooperated in intelligence collection. In this case, intelligence fueled the military operations needed to systematically isolate and destroy the insurgents’ network. If we were to apply this model to safe zones, police forces would have to be recruited from the safe zone’s refugee populations. Additionally, as safe zones would turn into small towns, civil authorities would also have to be recruited from the refugee populations. The safe zones would need to be established like any other municipality with schooling, local economies and government services. In following the Malayan model, these services would need leadership and representation in committees with law enforcement and military representation. The goal is to create a safe and stable environment in which the military works with recruited police forces. Concurrently the state department provides the primary assistance for civil affairs. Like Malaya, plans and policies for the safe zones would be done through joint civil-military planning.

The entire safe zone concept could quickly be eradicated if the U.S. were to commit troops to current areas of conflict that exist in Iraq and Syria and conduct counterinsurgency in them. However, this does not seem probable. Instead, after the fall of Mosul, the U.S. will most likely shift focus to Raqqa where it is doubtful that U.S. ground troops will be the main effort to seize Raqqa from ISIL. However, since the Trump administration has indicated a commitment to use more troops in Syria, it may be the case that establishing safe zones is a way to accomplish that objective without having American ground troops doing most of the fighting. Thus, American ground troops will be in position to capitalize on gains in Raqqa as they are essentially used as a reserve to support military operations against ISIL. None of this has been decided, and it is possible that this assessment will prove inaccurate. As Secretary Mattis recently presented the White House with a classified plan for the defeat of ISIL, no reports indicate that safe zones were part of it. However, this does not mean that safe zone options have been removed from consideration. It is simply too early to know right now.[vii]

Whether safe zones are established or the U.S. continues in its current role, the lessons from Malaya endure. If we assume safe zones do become a course of action, the success will be in the execution. Plans for safe zones should begin with a focus on the endstate of what the U.S. hopes to achieve strategically. The strategic end goals should be focused on, but not limited to, the following:

Conclusion: The President needs to understand the sacrifice that America would have to make in establishing safe zones. For the reasons highlighted above, safe zones can have strategic benefits, but they will inevitably be weighed against domestic concerns. While the U.S. has been engaged in war and nation building over the last fifteen years, our schools and infrastructure have suffered, and the American voting population is sensitive to these pains. Although President Trump has indicated his “absolute” commitment to safe zones prior to the Executive Order Protecting the Nation from Foreign Terrorist Entry, it is doubtful that he has been briefed on the comprehensive details regarding the sacrifices for their success. Although safe zones have not dominated the national conversation recently, the concept has not gone away or been dismissed. In fact, safe zones as an American foreign policy option have the capacity to be resurrected very soon.