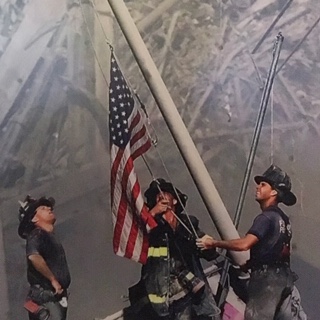 On a warm, sunny September morning in 2019, I walked to the One World Trade Center. During the week, the area around it bustles with activity. The Freedom Tower rises tall and proud near the two Memorial reflecting pools on the 16 acre rebuilt site. These two Memorial pools are located on the spots where the iconic North and South Twin Towers of the original World Trade Center once stood. In remembrance of those killed in the attacks of 2001 and 1993, each one of the 2983 names is inscribed along the Memorial pools.

In an effort to remember the tragic events of Tuesday, September 11, 2001, I spent a morning at the 9/11 Memorial and Museum. Since moving to New York City recently, I had planned on visiting. It seemed appropriate to do so only a few days before the anniversary of those attacks. For anyone living in or visiting NYC, it should be a high priority of places to go. The events of September 11, 2001 re-shaped the entire twenty-first century. The effects of that day reverberate and will continue to do so for generations.

An enduring mission of the 9/11 Museum and Memorial is to educate and tell the story so that future generations will know what happened on that day. It has been eighteen years. Therefore, a population of young adults are coming of age without having lived during 9/11. The Museum and the Memorial exist to serve and to honor those that lost their lives on that day. Furthermore, it captures the human experience, the loss, the heroism, and the triumph of the American and world spirit that arose in the aftermath.

Telling the Story from the Beginning

The 9/11 Museum and Memorial gets crowded early, which I consider a good thing. Therefore, I opted for the early morning tour prior to official hours of operation. I was with a group of about twenty people. Our tour guide was professional and well-versed in re-telling what happened and the history behind it. The story begins with the actual construction of the original Twin Towers. The goal had been an ambitious project to make NYC a great port city and as the name suggests, the center of world trade.

The construction of the World Trade Center and Twin Towers took place in 1973. It was built in lower Manhattan between what is known today as the Financial District and Tribeca. Other landmarks in the neighborhood include Federal Hall, the New York Stock Exchange, Battery Park, and Trinity Church. By the 1980’s, the World Trade Center became profitable, and the original vision of reviving commerce and trade came to fruition.

The financial history of the World Trade Center is key. It was targeted because of the economic prosperity that it not only represented but also contributed to. When the towers were destroyed, many people who were killed worked in the finance industry. Among the worst companies to suffer was Cantor Fitzgerald. In fact, the firm lost more people than any other organization with 658 employees becoming victims of the devastating attacks.

While the World Trade Center represented financial strength, the Pentagon symbolized American military might. Furthermore, Capitol Hill was the intended target of Flight 93, which went down in a field near Shanksville, Pennsylvania.

The history of the World Trade Center includes an attack that took place on February 26, 1993. Six people were killed by a truck bomb placed beneath the North Tower. The Memorial keeps their names and pictures along with the 2977 victims of September 11. While the truck bomb failed to destroy the buildings, our tour guide noted that it did lead to some improved security procedures that may have helped to prevent further loss of life on September 11.

A section of the museum wades into the history and rise of Al-Qaeda, which is Arabic for “the base”. The group emerged from the 1980s emboldened by their fight against the Soviet Union in Afghanistan. The Soviet departure from Afghanistan gave Osama bin Laden, their founder and leader, confidence that a small dedicated group could successfully fight against a world superpower. During the first Gulf War, when the U.S. fought Saddam Hussein’s Iraq and in the process liberated Kuwait, Al-Qaeda turned their attention to the United States.

Among many grievances, the terrorist group resented the U.S. military presence in Saudi Arabia during and in the wake of the first Gulf War. Furthermore, Al-Qaeda opposed U.S. support for Israel. Finally, Al-Qaeda objected to sanctions that the U.S. imposed on Iraq in the 1990’s. As a result, Osama bin Laden declared war on America in 1996.

While few people in America knew or cared, Al-Qaeda plotted and executed a series of deadly attacks. In 1998, they used truck bombs to attack U.S. embassies in Kenya and Tanzania, subsequently killing 224 people. Following-up the embassy bombings was the 2000 attack on the destroyer USS Cole in Yemen. This attack killed 17 Navy sailors.

For more detailed history, I recommend a book called The Looming Tower: Al-Qaeda and the Road to 9/11

by Lawrence Wright. The book is informative and easy to read.

The Events of the Day

The sky on the morning of September 11, 2001 was bright blue, and cloudless. A picture taken shortly before the attacks looked like a postcard image (see above). It was a regular work day for most people. They traveled via train and subway from outer boroughs, New Jersey, and Long Island. Most people had never heard the name Osama bin Laden. Very few had heard of Al-Qaeda.

That morning nineteen hijackers seized control of four planes. The four aircraft took off from airports on the East Coast bound for the West Coast. This was a deliberate decision by the terrorist plotters to ensure each crash had enough explosive fuel. American Airlines Flight 11 was the first plane to strike the north face of the North Tower at 8:46 am. United Airlines Flight 175 struck the South Tower 17 minutes later at 9:03 a.m.

American Airlines Flight 77 hit the western side of the Pentagon at 9:37 a.m. Finally, delays on the Newark Airport runway stalled United Airlines Flight 93. As a result, the other attacks occurred prior to the hijacking of Flight 93. Part of the story of Flight 93 is that the passengers and crew became aware of what was happening as they placed outbound calls from the plane. One of the last audible words was that of Todd Beamer, who said, “Are you ready? Okay. Let’s roll.” With that the passengers and crew charged and attacked the four hijackers. This action ultimately brought the plane down and thwarted a potential strike on the Capitol building. The Museum provides an emotionally gripping story of the heroic actions of the passengers on Flight 93.

Heroes of the Day

The museum and tour provide multiple accounts of heroism on the part of many people. Its exhibits capture the panic, the fear, the chaos, and confusion as well. But, in the midst of the turmoil, there are inspirational stories.

In a city that can feel cold and impersonal, the people of New York united together and became as strong as ever. Clearly, the first responding police, fire fighters, and port authority police deserve recognition for their selflessness and sacrifice. One of the displays recognizes the firefighters of Ladder Company 3. They were led by Captain Patrick “Paddy” Brown, who served as a Marine in Vietnam. He was committed to saving as many people as possible before he was killed.

Another remarkable story is that of Jan Demczur, who was employed as a window washer. He and five other people were stuck in an elevator shaft around the 50th floor of the North Tower. Using his squeegee, Demczur pried open the shaft. He and the other people then took turns hacking at the dry wall that blocked their way out. The trapped passengers eventually made a hole, and managed to escape before the North Tower collapsed.

These stories and others help to highlight some of the extraordinary actions that people took on that day. While the tragedy is real, the American fighting spirit and will to persevere was and remains a marvelous thing.

The United States received an outpouring of support from many nations. The first part of the 9/11 Museum has a section where people around the world react to the attacks. Each face bears the same shocked expression.

The day changed everyone’s life in some way. Many people remember where they were when it happened. It was and still is the single worst attack by a foreign actor on U.S. soil.

Since that time, U.S. foreign policy has been largely dominated by the War on Terror. The events of this week still bear that out as President Trump called off a meeting with Taliban leaders to discuss peace talks in Afghanistan. The war in Afghanistan remains the longest war in U.S. history. There are currently 14,500 U.S. troops stationed over there.

Additionally, Osama bin Laden, the mastermind behind the attack, is now dead. A team of elite Navy SEALs killed him in a raid on May 2, 2011. The raid took place at a compound in Abbottabad, Pakistan. Thus, marked the end of an exhaustive search to achieve some sense of justice for what happened on 9/11.

Additionally, the toxic fumes from ground zero have caused the deaths of many of the emergency personnel who responded. The fumes caused many forms of cancer, which continues to afflict and take the lives of the first responders. This issue recently came to light prominently with a testimony that Jon Stewart delivered to Congress on behalf of 9/11 first responders. Congress ultimately passed the 9/11 Victim Compensation Fund.

It is hard not to walk through the 9/11 Memorial without feeling a rush of emotion. There is a picture for each victim. Most of the pictured faces are smiling and cheerful. The people in them are from different places, ethnic backgrounds, races, and religions. They worked in many industries- some white collar, blue collar, and public service. They were loved by family and friends, and taken from them too soon.

New York is a city with people from all over the world. People come to live and work, and try to make a good living. As I walked from the 9/11 Memorial back outside to the streets of lower Manhattan, I could imagine the faces that I had seen inside smiling in their pictures. I could see them walking these streets once upon a time. Furthermore, I could see them in the faces of the people walking on a September morning in 2019 too.

Today, the Freedom Tower stands large and imposing in the Manhattan skyline. Ground zero has been reborn from the rubble of the attacks. The area stands as a center of commerce and trade again. Eighteen years after the attacks, the memory of those that died endures through the every day actions of those that have returned to work, live, visit, and enjoy the revival of One World Trade Center and the area around it.

The terrorists wanted to destroy America’s way of life. They failed. The American spirit endured. It is as strong today as it was on September 11, 2001. The 9/11 Museum and Memorial do an excellent job reminding us of that. As long as we continue to honor the memory of those that died, recognize the heroism of those that responded, and cherish the unity that it brought to the world and the United States, it will remain strong forever.