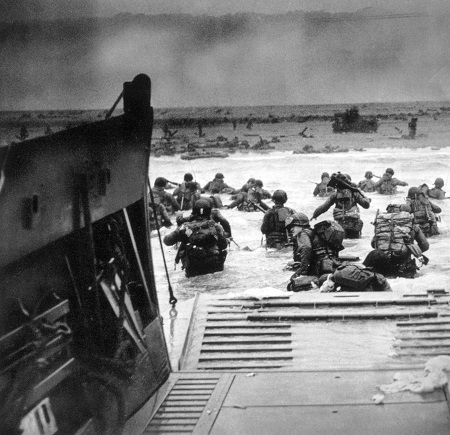 If the words sound like the cadence that a quarterback might shout before a snap, well, that is kind of the point.

These are the code names for the five beaches upon which Allied troops landed on June 6, 1944. The main countries involved were the United States, Britain, and Canada. Together, Allied troops made a brave and heroic dash across the English channel onto Nazi occupied France. This was no small feat. As seen below, the numbers were staggering. The risks were high. But, by the summer of 1944, the Allies had to take action. They decided that Hitler and his Nazi regime needed to be destroyed.

At the time, the Supreme Allied Commander, General Dwight D. Eisenhower, future American President, and all-around American badass, was the man in charge. Or for those of you who really know your acronyms, he was the HMFIC! Last year, I wrote about General Eisenhower and some of the history of one of America’s greatest generals.

The Invasion by the Numbers

This was the largest amphibious assault in U.S. military history. Let’s break it down by the numbers —

Imagine being a young soldier on that day. You are packed in a small landing craft and float to an unknown beach. Your gear is soaked. Your .30 cal M1 rifle is soaked. You’re shaking with cold and nerves. You’ve been trained, yet wonder if it is enough. Bullets ping the hatches. You must wonder if you will make it out alive. Many did not.

The “human factors” were remarkable. Soldiers packed gear to survive for three days. But, what happened when they didn’t land on the shore? What happened when the landing crafts dropped them in the water? Ammunition, rations, and medical supplies weighed the soldiers down. They had a choice to either drown or ditch their gear. Unfortunately, many soldiers did drown under the weight of their gear. One can only imagine how difficult the invasion was for the average soldier.

For further reading about the “soldier’s load”, S.L.A. Marhsall’s book Soldier’s Load and the Mobility of a Nation is one that is often studied.

There are many books and resources that provide more details about the battle and the history which I will provide links to below. However, I think that it is important for people to have a basic understanding of the history. So, here is a list of some key facts to takeaway and reflect on in honor of today:

D-Day was decisive. It turned the tide of World War II. In less than a year, Nazi Germany would declare unconditional surrender. That day of victory was called V-E day on May 8, 1945. V-E stands for “Victory Europe.”

Today, we remember the legacy of those that fought and died at Normandy. We live in turbulent times. However, D-Day is a moment to pause and reflect.

D-Day is an opportunity to be grateful for the millions of Americans that have been willing to serve their country and put their lives on the line. As highlighted earlier, the human factors were incredible. It is hard to imagine the difficulty of what America’s heroes accomplished. But, they accomplished it nonetheless. And the world is better for it!

If one has the means, a visit to France is ideal. To actually see the beaches where the Normandy invasion took place is an amazing experience. The row of perfectly aligned white crosses is emotional.

But, if one does not have the time or the means, there is another great option. The National D-Day Memorial is in Bedford, Virginia. Why Bedford? Bedford was made famous for the “Bedford Boys”. The town sustained the most casualties per capita of any town in the United States. With a population of only 3,000 people, nineteen of its citizens were killed on Normandy.

However, COVID-19 is causing some temporary halts in activity. Nevertheless, the D-Day Memorial will open again. In the meantime, the website provides the opportunity to virtually commemorate the 76th Anniversary of D-Day.

The First Wave: The D-Day Warriors Who Led the Way to Victory in World War II