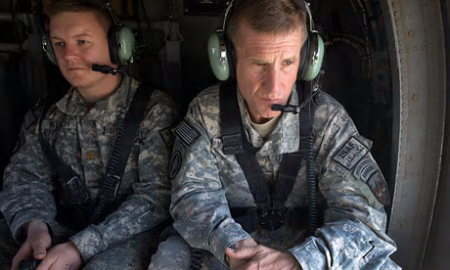 I approached reading General Stanley McChrystal’s memoir, My Share of the Task, with high expectations. I tend to read a lot of memoirs from high ranking military leaders with noted observations on some of the habits and techniques that made them successful. While a lot of people are awed by General McChrystal’s one meal a day and his rigorous daily exercise, I found that his success as a leader can be summarized in one word: Passion. General McChrystal’s passion for his soldiers and the men and women he served with nearly overwhelms (in a good way) the reader on each page. It becomes very clear to the reader that General McChrystal’s passion for service and passion for command was the bedrock upon which he was not only personally successful but also drove the success of the units that he led. Furthermore, it cannot be understated how his wife and his family supported him in his demanding profession. The gratitude that he feels toward his family is also clear throughout the book, and he has no illusions that without his families unwavering support, he would not have been able to accomplish his “share of the task.”

Throughout the book, I appreciated General McChrystal’s candor. He wasn’t too proud to admit occasional mistakes, and he explicitly states that there were times when he had to figure out his own style of leadership. He mentions that occasionally he would try to find his direction between being too kind and too harsh. Ultimately, he learned that there was a value in just being consistent. I made note of those small nuggets of wisdom that permeate the book. Additionally, General McChrystal continually mentions his love for history and reading. He applied sharp analysis to a multitude of situations by simply reading books and resources that could give him context to the complexity of certain situations. He fits a pattern of extraordinary military readers who are voracious readers.

Throughout the book, I took away lessons on building teams by knowing your soldiers and employing them in accordance with their capabilities. Additionally, General McChrystal built strong teams through trust. The book becomes exceptionally thrilling in the chapters in which his team hunted Abu Musab al-Zarqawi. In some of the most critical moments during the hunt for the terrorist ringleader, General McChrystal displayed a high level of trust in the judgment of his subordinates. This includes moments in which he wanted to act on some intelligence, but had the patience to trust the advice of a subordinate in his task force named J.C. In a critical moment during the hunt for Zarqawi, J.C. advised tactical patience to which McChryatal agreed. The decision paid off not too long after he displayed trust in J.C.’s judgment. Furthermore, on the Zarqawi takedown, I was interested in the conduct of the interrogations and how the interrogators got some of the key detainees talk. In what I came to recognize as McChrystal’s style, the interrogations were successful due to the rapport and trust that the interrogators built with high level detainees. They learned about some of these detainees personally, and managed to leverage their egos and idiosyncratic behavior traits to their advantage. Overall, I loved reading about McChrystal’s time in Iraq as JSOC commander. It was impressive to hear how he constructed his own network to defeat the insurgent network. He clearly had a strong sense of the need to streamline the cycle of intelligence gathering and used it to drive operational tempo. The results speak for themselves in Iraq. General McChrystal personally drove the pace of operations through his relentless drive and unwavering work ethic.

The chapters on Afghanistan are informative as well. General McChrystal clearly had his work cut out for him from the beginning. He sought to replicate many of the principles that made him and his team successful in Iraq. The reader also sees him thrust into a new role in which for better or worse he was forced to handle the political dynamics that came with the role of ISAF commander. But, he managed to succeed despite some of these early setbacks, and ultimately secured a similar surge of troops in Afghanistan to accomplish the new counterinsurgency strategy. One senses the overwhelming nature of the task and the immense heartaches and pains of trying to turn the Afghan situation around. It feels abrupt, which it was due to the release of the career damning Rolling Stone article. General McChrystal doesn’t make any excuses or apologies for it though. In the end, he left his command and the Army, and after reading about the challenges and burdens placed upon him in over thirty years of hard service, the reader can sympathize with his wife, Annie, who at the book’s conclusion, felt a sense of relief once her husband’s journey in the Army came to an end.

General McChrystal’s legacy continues in the military today. His actions as JSOC commander deserve careful study, and will be canonized in American military history. Through his personal example of leadership and his unrelenting passion for his soldiers and his country, General McChrystal will endure on the roster of great American military leaders. This book is devoid of bravado. It is a testament to the straightforwardness and humility of a man who embodies service and sacrifice to his soldiers and a grateful nation.