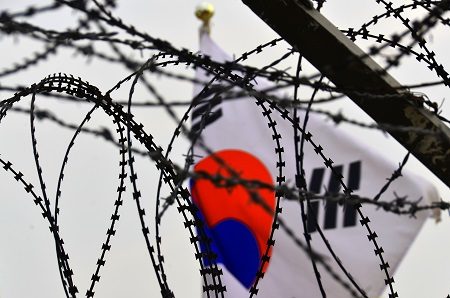 “The Worst Problem on Earth”

In examining how to deal with the North Korea threat, it is clear that there are no good options. Every strategy is cringe worthy. Easy answers are elusive. History is always a good teacher, but the situation today is unique for several reasons.

North Korea has the equivalent of a gun pointed at the head of a major metropolitan city: Seoul, South Korea. Seoul bustles with nearly twenty-five million people between the city and surrounding area. Residents in Seoul enjoy liberties such as free commerce, free speech, diverse religions, and political activism. It also has many leisure activities like shops, bars and restaurants.

In a matter of moments, 8,000 artillery cannons positioned across the demilitarized zone (DMZ) could destroy Seoul. Thus, as Kim Jong-Un’s regime relentlessly pursues an intercontinental ballistic missile (ICBM) that is capable of carrying a nuclear warhead, there are only a few realistic strategies. In the July cover story for The Atlantic, Marc Bowden, author of books such as Black Hawk Down and Guests of the Ayatollah, explores these options. With each option his position is clear, “It’s not going to be pretty.” It may not be long until North Korea has the ability to strike a major American city with an ICBM. If they are able to put a nuclear warhead on it, things could become catastrophic.

It is important to understand what motivates North Korea. What is their primary objective? Bowden has an interesting conclusion about Kim Jong-Un. He writes that his decisions are very much rational and calculated. While western media enjoys depicting North Korean leaders as unhinged and crazy, this is actually a mistake. They have survived and maintained their regime over three generations.

Furthermore, considering the position that the U.S. finds itself in today, North Korea has boldly endured multiple presidential administrations and different strategic approaches while continuing to pursue their agenda. What is their agenda? The goal for North Korea is fairly simple and it involves the eventual reunification of Korea. As Professor B.R. Myers explained, “The whole point of the military-first policy is ‘final victory,’ or the unification of the peninsula under North Korean rule.” Myers has said that the goal of North Korea would be peace treaties with the South, followed by a North-South confederation, the eventual withdrawal of U.S. troops from the peninsula, and in the long-term a fully unified Korea.

With the recent election of South Korean President Mun Jae-in, parts of that strategy have become more practical for the North especially the peace treaty and confederation. Thus, in understanding North Korea’s motives, it is important to realize the extent to which a united Korea remains the end state. Professor Myers explains, “To a radical Korean nationalist, the division of the nation, the race, is an intolerable state of affairs.” North Koreans want to reverse the status quo. They want one Korean state.

Marc Bowden discusses four specific strategies that the U.S. can practically consider to deal with North Korea. They include: Prevention, turning the screws, decapitation, and acceptance. “Prevention” involves a full-scale military assault undertaken before the North has the ability to employ nuclear tipped ICBMs against the U.S or its allies. “Turning the screws” involves limited use of military force in a kind of tit for tat that will show the North Korean regime that the U.S. will not bluff or hesitate to escalate actions as needed. “Decapitation” involves the ability to overthrow the regime internally primarily through targeted assassinations. Finally, the strategy of “acceptance” is as the name suggests simply accepting things as they are and allowing for time to work the situation out in a better direction.

This is the most simple strategy in terms of the overall objective, which is to destroy North Korea with force and remove the Kim dynasty. While it seems straightforward, there are a multitude of risks and planning considerations. First, the sheer amount of casualties cannot be understated. Multiple nations are at risk of nuclear and chemical attacks from North Korea. Besides South Korea, another one of these nations includes Japan and it’s capital, Tokyo, which has a population of 38 million people. U.S. troops in Japan and South Korea would also be at risk of attack. Furthermore, world markets would be in a free fall overnight. There would be millions of refugees. Additionally, it would raise the possibility of conflict with China due to a unified Korea with U.S. military troops on its border.

Bowden writes that a U.S. or even a South Korean military intervention would be successful. We would win. But, the risks are enormous. How would the U.S. and South Korea mitigate a retaliation from the North? Bowden writes, “The brightest hope of prevention is that it could be executed so swiftly and decisively that North Korea would not have time to respond. This is a fantasy” (Bowden 69). Bowden believes that the costs of even a “perfect first strike would be appalling” (Bowden 70).

The idea of prevention is not new. On 15 April 1969, North Korea shot down a U.S. spy plane, an EC-121 and killed 31 Americans aboard. To this day North Korea celebrates this shoot down as a “badge of national honor.” Additionally, the Nixon administration considered a range of options including nuclear strikes. However, they declined to take military action.

On 26 March 2010, North Korea sank a South Korean Navy ship, Cheonan. Turning the screws strategy would necessitate a U.S. or South Korean response. It is a strategy that advocates a tit for tat. If North Korea acts out of line, the U.S. and its allies will respond with equal or greater force. The hope is that events do not escalate any further beyond response and counter-response. However, Bowden concludes, “Any limited strike would almost certainly start an escalating cycle of attack/ counterattack” (Bowden 72).

This strategy contains significant risks similar to the prevention strategy. A lot depends on the North Korean leader’s response, and Bowden writes that Kim’s “power is absolute, and pugnacity is central to it.” It does appear that this is the strategy currently being employed by both the U.S. and North Korea. As the North tests missiles, the U.S. and South Korea conduct military exercises. Conversely, when military exercises are conducted, the North will test missiles. This type of back and forth is called the “provocation cycle.” Provocation cycles can be preludes to much more drastic action to include full-scale war.

The decapitation strategy is a covert one. It relies on the CIA and intelligence agencies. The intent is to remove the Kim regime through assassination or a military backed coup. However, due to the nature of the North Korean regime, it is incredibly hard for spy networks to penetrate the North. North Korea has frequently accused the U.S. and South Korea of attempting to assassinate their leader.

There are also plans for special forces teams to strike the North Korean leader. However, as Bowden explains, such an action would disregard a U.S. policy prohibiting political assassination (Bowden 73). This strategy contains an enormous amount of risk. Bowden suggests that the best hope is that it happens “within Kim’s inner circle.” This is reminiscent of the U.S. hope that Saddam Hussein would be removed by a military coup. The line used to be, “I can’t tell you who the next leader of Iraq is going to be, but his first name starts with ‘General.'” This military coup never occurred in Iraq. Instead, the U.S. chose to conduct a military intervention, which overthrew Saddam’s regime in 2003.

With the final option, one has to ask the question, “Would you be comfortable with North Korea having the ability to strike Los Angeles with a nuclear weapon?” If the answer is yes, then acceptance is preferable. As Bowden explains, acceptance is the sobering reality that “It’s a done deal.” North Korea will have nuclear tipped ICBMs capable of striking the U.S. Now what?

This seems to be the worst strategy, but Bowden suggests it is most practical. Furthermore, he cites the Cold War as setting a historical example for it. The acceptance strategy comes down to buying time. Maintaining the status quo is the basis for the strategy. Meanwhile, the U.S. develops more options such as improved anti-missile capabilities and creating conditions for disarmament talks. This strategy is vague because there are not a lot of good options right now. But, it relies on buying time to develop more options that don’t involve millions of lives lost on either side.

The article concludes that “North Korea is a problem with no solution… except time” (Bowden 77). It also assumes that Kim will not use his nuclear tipped ICBMs. It places trust in the assumption that Kim is not a “madman.” Ultimately, he wants self-preservation for his regime. But, President Trump has tweeted, “It won’t happen.”

As previously stated Bowden’s conclusion points to acceptance as the only viable option. To gain some insight on what the acceptance strategy looks like, South Korea is the best guide. They live under the constant threat of destruction from the North. Bowden summarizes South Korea’s acceptance with a quote from one resident, who said, “Since I have been living here so long, I am not scared anymore. Even if there was a war now, it would not give us time to flee. We would all just die in an instant” (Bowden 77).

On July 4, 2017, North Korea successfully tested a missile with a range that could potentially hit Alaska. In response, the U.S. conducted military exercises with South Korea. This included two B-1B bombers escorted by fighter jets. The war on the peninsula never officially ended in 1953. As such, it continues on a limited scale to this day. The entire situation is a giant tinder box. As military thinkers, it is important to understand the range of options. Mark Bowden’s article helps further this understanding.

Source: July/ August 2017 Cover Story for The Atlantic, “How To Deal with North Korea“, Mark Bowden