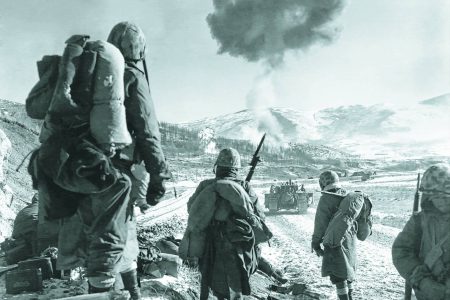 Hampton Sides is the author of On Desperate Ground: The Marines at The Reservoir, the Korean War’s Greatest Battle

The topic is the Battle of the Chosin Reservoir. This battle took place in the Fall and Winter of 1950 during the Korean War. Marines were surrounded at the Chosin Reservoir by over 100,000 of Mao’s Red Army forces. With their backs to the wall and facing total annihilation, they fought back with tenacity and determination. The fighting took place in sub-zero temperatures on unforgiving terrain. The Chinese attacked the Marines at night with wave after wave of soldiers storming the Marines’ positions. The fighting became hand to hand combat quickly. Marines used knives, bayonets, and helmets to repel the Chinese attackers.

In the end the Marines and Allied forces were able to execute a withdrawal from the Chosin Reservoir. They were surrounded by an overwhelming force and against all odds managed to execute a complicated maneuver to avoid destruction.

In the interview, Hampton discusses many topics to include:
– How the Korean War was a failure of intelligence
– The difference in leadership between Generals MacArthur and General Oliver P Smith
– The nature of the fighting and what it was like for the Marines on the ground
– How the war ended or rather how it didn’t end

Finally, in researching his book, Hampton talked to many veterans of the war. He explains how the Korean War became considered a “forgotten war.” However, books like On Desperate Ground help keep the memory of the Korean War and those veterans alive.

This episode is dedicated to the brave men and women who served our nation during the Korean War. We should never forget the service and sacrifice of so many great Americans.

Check out Hampton’s book:
On Desperate Ground: The Marines at The Reservoir, the Korean War’s Greatest Battle

Give Me Tomorrow: The Korean War’s Greatest Untold Story–The Epic Stand of the Marines of George Company