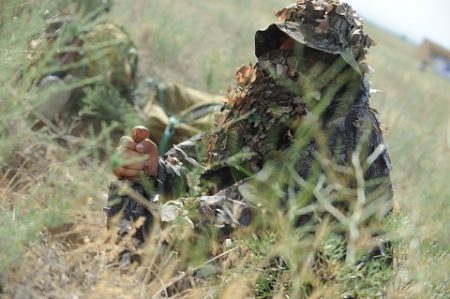 “There are no happy meals in the field.”

On Fieldcraft is an interview about how to not only survive but thrive in the field. I had the pleasure of interviewing Marine Staff Sergeant Chad Skaggs. Chad is a Marine’s Marine. He is an intense infantryman, and he wrote a book on fieldcraft.

He surveyed the landscape of resources on the field. After realizing there was a lack of information, Chad took initiative to write a book on the topic. In the interview, Chad provides some excellent tips on field survival.

Living in the field is tough. Advertisements make military training look like a giant Spartan race. Far from it. The challenges are more mundane. How to stay dry? How to wear gear properly? What type of clothing to wear? Chad shows that the little things make a big difference.

The way of our people…

Chad has talked with many infantry leaders about fieldcraft. Many infantrymen contributed to his thinking.

What he noticed was that there was no formal instruction on fieldcraft. A lot of Marines left school with different ideas of fieldcraft. So, Chad collaborated with some of the best minds in the infantry and tried to create a new doctrine.

“Everything we do has to be simple and effective.” He explains that we have to learn to use the things we have to their maximum effectiveness.

Chad does not like cotton. That comes through in the interview.

For the love of God, wear wool socks.

When we discussed clothing, he mentioned that cotton absorbs moisture. On the other hand, wool wicks moisture away. He says that with a simple transition to wool socks, infantrymen will not need to bring as many of them to the field. This is good because it saves space and reduces weight. There is the old adage “Ounces equal pounds, and pounds equal pain.”

Take Care of Your Feet

Wearing the right boots is important. However, it is also important to take care of your boots. People get lazy about it. After every field exercise boots should be carefully scrubbed and cleaned.

Chad explains that we do this so the boots retain their waterproofing ability. Taking care of ones boots requires discipline. Discipline is not just “keeping your hands out of your pockets.” This is a reference to a part of garrison life where hands in pocket is prohibited. It is often viewed as a contrast between “field discipline.” However, the two are not mutually exclusive. Chad emphasizes that simple forms of discipline like cleaning boots is extremely practical.

When able, an infantryman should always seek to air out and dry their feet. We talked about how blisters form. There is nothing worse than hiking with blisters. Blisters form when moist material rubs against the skin causing friction. Therefore, keeping feet dry and wearing wool socks is a necessity.

Hiking and using the ruck sack

I remember training with the old ILBE pack. It was a nightmare in terms of functionality. The Marine Corps upgraded to a much better ruck sack. The upgraded pack has a suspension system and straps to properly adjust the weight.

As Chad explains, the weight should be higher up on the pack. Ultimately, it should rest on one’s hips. The goal is for the weight to push a person forward. Too often when people fall out of hikes, their packs are a mess. Furthermore, they will be at the back of a hiking formation with their pack “pulling them backward.” The goal is not to fight against the weight in your pack, but to work with it. It will be heavy, but it can still be manageable.

Chad also provides pictures and images in the book that show where to compartmentalize certain items. Additionally, he always packs his pack the same way. This is useful because he knows where everything is at all times. As he explains, he can search in the dark for any item and know how to find it without using a light. This is tactically sound and something all infantryman should train to do.

“Get Comfortable Being Uncomfortable”

At one point, we joke that the “Fortnite Generation” is entering the Marine Corps. We still get a lot of Marines that grew up on farms and are acclimated to the outdoors. But, we also get many that do not have this background. While they want to challenge themselves, life in the field can become a shock to the system.

As I mentioned earlier, advertisements show a lot of physical training, obstacle courses, and endurance courses. But, that is a small fraction of the overall training. Waking up in the cold with little sleep and little food is where the real mental and physical challenge begins. It takes practice and needs to become conditioned as a habit.

Many Marines have spent time going through the gauntlet of field training at places like 29 Palms, California. This can be a month of eating, sleeping, and living outside in the dirt with no shelter and no modern conveniences.

An infantryman has to embrace life in the field. The infantryman should feel confident in their ability to not just survive but thrive. They should be confident in how to employ their gear and equipment the right way. The goal is to get “comfortable being uncomfortable.”

Chad has sought to write an important book on fieldcraft. There are other doctrinal publications which motivated him. There are also a few other books that he mentioned.

For those in the military seeking the book, Chad’s e-mail can be found in the GAL. His personal e-mail is also skaggs.chad@gmail.com. You can also e-mail me. Tell me a little about yourself, your unit, and your experience in the field. We would like to keep learning from each other and pushing important knowledge to those serving out in the field.

Map Reading and Land Navigation and Marine Scouting and Patrolling

Bushcraft 101: A Field Guide to the Art of Wilderness Survival