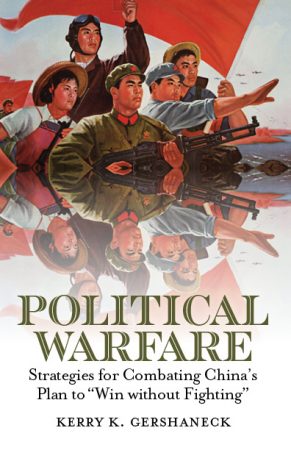 Political Warfare poses an existential threat to the United States. Democracies worldwide are under attack. China is dedicated to destroying the American way of life and making the U.S. a “vassal state.” Moreover, they are seeking to win without fighting. Political warfare is the means to do that. In this episode of the PME podcast, Professor Kerry K. Gershaneck discusses the strategy and tactics of political warfare.

The notes and references below correspond with the interview.

Professor Gershaneck is currently a Visiting Scholar (Taiwan Fellow) at the Graduate Institute of East Asian Studies, College of International Affairs, National Chengchi University, with special focus on the People’s Republic of China and their use of political warfare. For a total of seven years, Professor Gershaneck was the Distinguished Visiting Professor at the Royal Thai Naval Academy and the Distinguished Visiting Professor at Chulachomklao Royal Military Academy, Kingdom of Thailand.

Professor Gershaneck has extensive regional security and academic experience in the Asia-Pacific Region. He has consulted for the U.S. government, HQ North Atlantic Treaty Organization (NATO), the United Nations Command (UNC) in the Republic of Korea, the American Bar Association, and various Asia-Pacific-based organizations.  In academia, he has taught at the university level for more than 25 years, primarily in topics related to National Defense & Regional Security, International Relations, Strategic Communication, Crisis Communication, Leadership Development, and Journalism.

America conducted political warfare during the Cold War. President Dwight D. Eisenhower created the U.S. Information Agency on August 3, 1953 as part of a reorganization plan under the Smith-Mundt Act of 1948. The Smith-Mundt Act helped establish overseas cultural and educational programs as well as Voice of America (VOA). The mission was to counter the Soviet Union with a pro-America message across the world. President Bill Clinton abolished the USIA in October 1998 under the Foreign Affairs Reform and Restructuring Act. Read more about the history of the USIA here. Alvin Snyder also wrote a book about the program called Warriors of Disinformation: How Lies, Videotape, and USIA Won the Cold War.

Professor Gershaneck discusses the phrase “end of history.” This is a reference to an essay written by Francis Fukuyama called “The End of History”. His essay became a book. The central thesis is that the end of the Cold War ushered in an era in which Western style liberal democracies would become an inevitable for all nations. Professor Gershaneck’s claim is that China’s emergence as a global power with an authoritarian system is a rebuttal to that Fukuyama thesis. Additionally, too many Western elites accepted Fukuyama’s claim without much critical thought. As a result, they were willfully blind to the threat that China posed.

Professor Gershaneck explains that political warfare is also tied into the idea of “unrestricted warfare.” At the end of the 1990s, two Chinese Colonels wrote a book called Unrestricted Warfare. Part of the book’s premise was that anything is on the table to include biological warfare, chemical warfare (i.e. drug warfare), and terrorism.

Under Chinese law, all citizens are obligated to cooperate and support the People’s Republic of China’s (PRC) intelligence efforts. As a result, Chinese citizens overseas play an important role in the promotion of the United Front Work Department’s goals and objectives. This provides a continuing infiltration and subversion in other nation’s internal affairs i.e. politics, education, media, and business.

Deng Xiaoping became the leader of the PRC after Mao died. He served from 1978 to 1992. Deng Xiaoping said, “Hide your strength, bide your time.” Professor Gershaneck interprets this phrase as meaning that the PRC’s long-term ambitions were always to overtake America and become the dominant global power. Consequently, American and Western leaders have been blind to the true nature of the PRC regime.

Americans Have Not Recognized the China Threat

In the interview, Professor Gershaneck discusses why American businesses have been complicit in working with China. With a lot of deep thought, he suggests that many American businessman are “traitors.” He quotes a line from Lenin, who is reported to have said, “The Capitalists will sell us (the Communists) the rope we need to hang them.” Professor Gershaneck asserts that business leaders have sold out their country to make money.  He also says, “We have people in America that want to take the investment funds of the Thrift Savings Plan and use it to invest in China.” Recently Senator Marco Rubio (R-Fla.) has put pressure on the Federal Retirement Thrift Investment Board (FRTIB) and demanded an end to this practice.

American servicemembers’ retirement funds should never be used to finance an adversary of the United States, nor should they bankroll foreign weapons or technology designed to someday harm them.- Sen. Rubio

We can decouple from China and do it in a way that doesn’t make America go broke. -Professor Gershaneck

The CCP is deeply influenced by the Soviet Union and an organization called the Communist International (Comintern). Mao worked closely with the Comintern going back to the 1920s. The CCP has adopted the tactics, techniques, and procedures (TTPs) of the Comintern. They continue to apply them to their modern-day political warfare campaign.

Political Warfare involves recruiting agents of influence to conduct espionage. During the Cold War, the Soviet Union was known to employ this tactic. In one of the most infamous “honeypot” incidents, a former Marine Corps Sergeant, Clayton J. Lonetree, was recruited by the KGB and eventually convicted of espionage on behalf of the Soviet KGB. Lonetree fell into a honeypot trap while serving on Marine Corps Security Guard detail at the U.S. Embassy in Moscow in the early 1980s. In the present day, the Office of the Director of National Intelligence includes information about attempted espionage operations against Americans.

The CCP is using the same Soviet tactics in America across the political spectrum and at the highest levels of the U.S. military. For example, former Vice Chairman of the Joint Chief of Staff Retired Admiral William Owens lobbied for the U.S. to stop arms sales to Taiwan and “review” the Taiwan Relations Act (TRA). He wrote an article entitled “America must start treating China as a friend.” This article was published in the Financial Times in 2009. Owens also lobbied on behalf of Huawei Technologies in 2010. Huawei is a Chinese telecommunications company with close ties to the People’s Liberation Army (PLA).

The CCP has agents living in Hollywood that help censor content. The goal is to make sure that movies fit into the CCP’s vision of acceptable content for the Chinese people. There are 1.4 billion people living in China. As a result, movie producers comply with this process to ensure that their movies are able to reach this large audience. However, this has the effect of promoting pro-PRC messages and preventing content that might be critical of the CCP. For example, the recent film Maverick had a controversy over the Taiwan and Japanese flag on the bomber jacket of the lead character. The flags were initially censored. See article for more details.

Professor Gershaneck says, “The first thing that you have to understand is that Taiwan is a sovereign country.” However, the CCP claims Taiwan for many reasons including its vast technological resources specifically in the field of semiconductor technology. As a result, the idea of “reunification” has been falsely promoted by the current CCP regime. Taiwan and China were never unified nor were they historically recognized as one country. Thus, China’s plans are annexation not reunification.

Taiwan is governed by the Republic of China (ROC), which fled mainland China to what was then called the island of Formosa. ROC forces under Chiang Kai-Shek took over the island after losing the Chinese civil war to Mao’s Communists in 1949. Under the ROC, there was a 38-year period of authoritarianism called the “White Terror.” However, by the 1990s, Taiwan had liberalized and adopted a democratic form of government. Professor Gershaneck explains that this form of government now presents a threat to China.

Professor Gershaneck references Edgar Snow, who wrote on behalf of Mao Tse-Tung. Here is an article that appeared in The New Republic in which Snow recounts a four hour interview with Mao. We discussed Snow in the context of “reunification.” Professor Gershaneck explains that Mao saw Taiwan as separate. This is different from how the PRC currently views China and its adoption of a “One China” policy.

We talked about the evolution of what is referred to as the “One China” policy. Professor Gershaneck explains that this goes back to the Nixon Administration and the diplomatic outreach to China to combat the Soviet Union. The policy is part of a CCP claim to territory that ranges from Taiwan to the South China Sea as far south as Singapore. Looking at a map, one can see the claims to the South China Sea represented by what is referred to as the “Nine-Dash Line”. During the Nixon administration, the U.S. recognized China’s claim but did not agree that these territories belonged to China.

As part of the opening with China, the United States no longer recognized the Republic of China diplomatically and instead recognized the PRC. This happened under President Jimmy Carter’s administration in 1979. In response, Congress passed the Taiwan Relations Act (TRA) that has allowed for U.S. arms sales to Taiwan and provided an implicit guarantee to protect Taiwan from invasion.

Professor Gershaneck says, “The Chinese Communist Party is nothing if not expert at generating a crisis, initiating a crisis, and then exploiting it in any way that it can.” We discuss the recent visit of U.S. House Speaker Nancy Pelosi to Taiwan. Her visit was intended to show support and solidarity to the small nation of 23.57 million people that sits less than 100 miles offshore from a CCP dominated nation of 1.4 billion.

Professor Gershaneck suggests that Speaker Pelosi’s visit gave the PLA cover to conduct military exercises and make threats. In fact, these exercises and the response had been planned for months. In the wake of the visit, the PRC ramped up its military intimidation, which is a form of political warfare. Additionally, China fired missiles into Japan’s exclusive economic zone (EEZ).

China is going to continue what they are already practicing. They are going to push using aviation assets and building up their Navy. Professor Gershaneck thinks that the PRC’s timeline for an invasion of Taiwan is within the next two years. He also believes that Xi Jinping will use his third term for a potential invasion. Unless the United States shows assertiveness and backbone, China under Xi Jinping will seize the opportunity to take action against Taiwan.

Professor Gershaneck has written extensively for news, foreign policy, and academic publications in Asia, Europe, and the U.S.  His books are listed below:

A New Japan-U.S. Alliance to Deal with the Threat from China. Tokyo, Japan: Seirindo, 2022. (Co-Author, in Japanese)

Two articles related to Chinese influence on campus. One is from Yale News and the other from Human Rights Watch. Both articles take a different side of the debate.