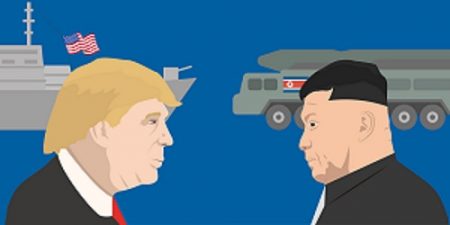 President Trump announced his intention to meet with North Korean leader Kim Jong-Un in May. This decision defies diplomatic precedent. It’s not unexpected from a presidency that consistently defies expectations. President Trump promised to do politics differently, and this decision is consistent with that promise.

While diplomacy is the preferred method of resolving international conflict, it is a complicated process. If mishandled, the most well meaning diplomatic engagements can fall apart quickly and more problems can emerge. The upcoming meeting between the two leaders arouses many questions, concerns, and hope too. Will something good emerge from direct talks? We will watch closely and see. In the meantime, we have history to guide us in anticipation.

The Professional Military Education podcast has covered a range of issues related to strategy and diplomacy. In an interview on the book Strategy, the author Sir Lawrence Freedman discussed strategy as “the art of creating power.” Two sides mutually agreeing to direct talks indicates that each feels that they have some leverage to use in negotiating with the other. The United States has its vast economic and military resources. Tight sanctions have been in place for months and the U.S. does not show any signs of giving them up. North Korea may feel emboldened by their missile tests which now clearly demonstrate their capability to strike the United States directly. Furthermore, North Korea has always maintained a bargaining chip by virtue of the thousands of artillery cannons that stand poised and ready to strike Seoul, South Korea at a moment’s notice. Each side has escalated to the point where they might be in a position to negotiate. For example, the U.S. loosens sanctions if North Korea halts missile tests.

In an interview with Jay Solomon about his book The Iran Wars, Mr. Solomon chronicled the process in which U.S. sanctions ultimately pressured and brought Iran to the negotiating table. However, sanctions took a long time to bring about the necessary pressure. In the meantime, U.S. diplomats engaged with their Iranian counterparts to lay the groundwork for a final agreement. During this time, President Obama never met directly with Iran’s Supreme Leader Ayatollah Khameini. But, he did send him several personal letters. Perhaps President Trump and President Obama have more in common than people realize. President Obama believed that he could use his personal influence to affect foreign policy. Does President Trump believe that he can have a similar affect with respect to Kim Jong Un?

In separate interviews with Dr. Kori Schake and Bruce Bechtol, a North Korea expert, there seemed to be a consistent narrative related to Kim Jong Un’s intentions. Both theorized Kim’s objective to be regime preservation. North Korea’s pursuit of nuclear weapons is a way to project power at home and abroad. In domestic politics, these weapons can engender immense national pride and solidify Kim’s support. From the perspective of international relations, nuclear weapons gives North Korea legitimacy. The world can’t ignore a nuclear weapons capable North Korea. Furthermore, nuclear deterrence becomes a means of self-preservation. Kim Jong Un knows that he is less likely to go the way of Saddam Hussein in Iraq or Qaddafi in Libya. However, one can argue that with artillery pointed at Seoul, deterrence doesn’t require nukes.

A meeting with President Trump gives Kim the legitimacy he seeks. The question is whether it is enough legitimacy to cause him to abandon his nuclear weapons program. For the moment, the U.S. President’s actions show that the U.S. takes North Korea seriously. Whether that gives the North Korean leader the credibility he seeks both at home and abroad is still to be determined. In the meantime, suspension of missile tests and less aggression on the part of the U.S. and South Korea are short term steps towards peace. For the sake of many innocent lives, we should hope that they lay the groundwork for long term peaceful solutions.

The final interview that is worth listening to is with Steven Lee Myers on Vladimir Putin. Mr. Myers discusses in his book how both Presidents Bush and Obama sought to engage with Vladimir Putin and re-establish better relations with Russia. However, as Mr. Myers explained Mr. Putin felt consistently snubbed by the inconsistency of U.S. talk with action. The most prominent example relates to the handling of Libya in which Mr. Putin saw the U.S. spearhead regime change after pledging only “humanitarian intervention.” Additionally, under the Bush administration, tensions persisted over the Iraq War as well as American withdrawal from the ABM treaty. All of these examples demonstrate how talk without consistency of action can give way to mistrust which fuels further animosity. This is something to consider as world leaders meet especially if preconditions aren’t firmly handled before the meeting.