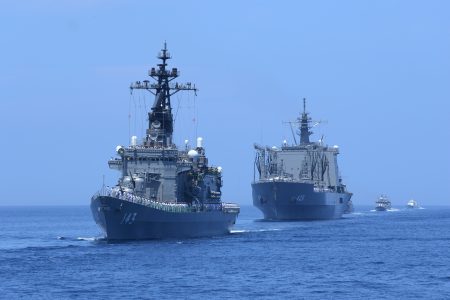 What is the state of the Japanese Military

In this PME podcast interview, I spoke with retired Marine Colonel Grant Newsham on the state of the Japanese Military. The Japanese military is called the Japan Self-Defense Force (JSDF). It is comprised of the Ground Self-Defense Force (GSDF), which has 150,000 people. The JSDF also has a Navy and Air Force that each have 50,000 personnel. The JSDF is surprisingly formidable. Contrary to popular belief, Japan is not strictly pacifist. In fact, they have all the resources they need to project military power.

So what is the problem? Because of Japan’s World War II experience, there has been an understandable “reticence” to allow the military to train and conduct operations that would make them a strong fighting force. Japan has had the resources, but not always had the will to combine and employ them.

Grant speaks to some of the internal attitudes. He describes a belief in Japan that “we don’t want to do that again” meaning build up strong military capabilities. Thus, the military has been underfunded and underappreciated. However, among the average Japanese citizen, Grant describes that there is a “latent understanding” about the necessity of the JSDF. Furthermore, the rise of China’s military has shifted opinion amongst the Japanese “ruling class” (i.e. politicians).

Shifting attitudes toward the Japanese Military

In 2011, a deadly earthquake and tsunami hit northern Japan. The military responded to conduct humanitarian aid and disaster relief (HADR) operations. However, despite the quick response, the Japanese were not trained or ready to do HADR operations. As a result, many people died in the aftermath of the earthquake. This turned into a wake-up call. Japan needed the capability to operate with amphibious capabilities needed to conduct operations such as HADR.

Additionally, the Ryukyu Island chains were undefended. Looking at the map, one can see that the southern chain of islands stretches down to Taiwan. Grant says that China believes this chain of islands belongs to them and that they “intend” to take them. Grant claims that these islands were poorly defended and “if you’re not there, you’re not interested.”

Finally, Japanese military leaders realized that their joint forces were not adequate. They needed the capability to integrate their air, ground, and navy together.

In 2013, Japanese ships floated across the Pacific Ocean to San Clemente Island, which is off the coast of southern California. There were three ships carrying units from the Japan Ground Self-Defense Forces (GSDF). The JSDF conducted two exercises with the United States Marine Corps called Exercise Dawn Blitz 2013 and Exercise Iron Fist 2013. Grant describes these exercises as historic and the culmination of Japan’s push to integrate their forces and build their amphibious capabilities. Furthermore, it was the first time that the Americans began to work with the Japanese as equals. Also, I remember supporting the exercise as part of the opposition forces (OPFOR). The GSDF charged up the high bluff of San Clemente Island while we shot at them with blank rounds!

There were a number of liaison officers (including Grant) that worked to make this progress happen. They learned that the Japanese have their way of doing things and did not try to impose the Marine Corps way on them. Grant explains that the Japanese do not think in the same linear fashion that America’s military thinks. They don’t necessarily apply “crawl, walk, run.” Grant says, “They basically put together a MEU and sent it to southern California.” In doing so, they just started running!

The Japanese apply a Confucian approach to learning in contrast to the more Socratic approach used by the Americans. In some cases, they started training without resources like proper communications. Their goal was to just do it, and learn from mistakes along the way.

What are the current Japanese and the American combined capabilities?

A lot of progress has been made. Not too many years ago, the thought of Japanese amphibious operations would have been unheard of. Japanese officers would have been fired for suggesting it and “drummed out of the service.” But, sensitivities have faded. The Japanese and Americans are conducting joint drills using F-35s. Japanese helicopters are also landing on U.S. Navy ships. Check out the video to watch the Japan Maritime Self-Defense Force (MSDF) land their SH-60J on the deck of a U.S. Navy destroyer.

Additionally, this week USNI News is covering the Reagan Carrier Strike Group (CSG) conducting joint training with the Japanese and the Canadians. The 31st Marine Expeditionary Unit (MEU), which is part of the Tripoli Amphibious Ready Group (ARG) is also taking part in the training with the Reagan CSG. Check out the article at USNI.

While progress has been made, there are still other challenges and steps that can be taken. For example, Grant points out that there is no joint U.S. and Japanese HQs in Japan. In fact, the Japanese don’t even have one for their own forces. While these are current shortcomings, Grant indicates that they could be remedied soon as Japan and the U.S. continue to focus on the Chinese threat.

Will they take action against Taiwan? China isn’t even making veiled threats. Grant says, “China is making no illusions that they are coming… there is no deal to be cut with the PRC” They are aiming to take Taiwan by force. It is not a matter of if but when. This is why the American and Japanese partnership is critical.

It can help deter Chinese aggression to have a strong joint capability between the U.S. and a treaty allies like Japan. Grant thinks that the Chinese want to “teach Japan a lesson.” They also have designs on the Senkaku Islands and Ryukyu chain (see above).

Additionally, the Chinese Communist Party is using COVID lockdowns to condition the population. Grant’s theory is that the lockdowns make it easier to control the Chinese people and remove opposition to Xi Jinping.

I asked Grant, “What is one thing that the United States could do right now to better deter China?” His answer is blunt: “Stop funding their military.” American businesses and Wall Street have been pouring billions of dollars into China.

One another financial vulnerability is that the Chinese currency does not have a lot of use outside of China. Grant explains, “That is something that rarely gets attention. The Chinese currency is not freely convertible… it has to pay in U.S. dollars.”

Grant Newsham explains, “It really is a prison camp of a nation.” Without nuclear weapons, no one would pay attention to them. Their nuclear capabilities and missile tests have worked well thus far. The Kim regime sees long-range nuclear weapons as a guarantee of its own safety. Additionally, Grant suggests that the Chinese have always benefited from a belligerent North Korea.

Within South Korea, there is a hard core leftist element that Grant describes as “pro-North Korea.” They typically see the U.S. as the problem. This complicates the U.S. relationship with South Korea. Grant explains that the hard left politicians are often elected for economic reasons. As a result, the average South Korean does not view Americans as the problem like the extreme leftist politicians. There is a conservative president now but there still exist strong factions of pro-North Korean leftists.

The U.S. has partnered with Australian Defense Force (ADF) to use Darwin, Australia as a power projection hub. It is one of several places where the American military has a staging area in the Indo-Pacific. America’s relationship with Australia is solid, but it needs attention. America cannot take the relationship for granted.

In 2015, I deployed to Darwin, Australia as part of the Marine Rotational Force-Darwin (MRF-D). This was a great opportunity to train and develop a stronger relationship between the U.S. and ADF.

Grant Newsham is a Senior Fellow with the Center for Security Policy. He is also a Research Fellow at the Japan Forum for Strategic Studies focusing on Asia/Pacific defense, political and economic matters. Newsham is a retired U.S. Marine Colonel and was the first U.S. Marine Liaison Officer to the Japan Ground Self-Defense Force. He also served as reserve head of intelligence for Marine Forces Pacific, and was the U.S. Marine Attaché, US Embassy Tokyo on two occasions.

Next March, he is planning to publish a book called When China Attacks.