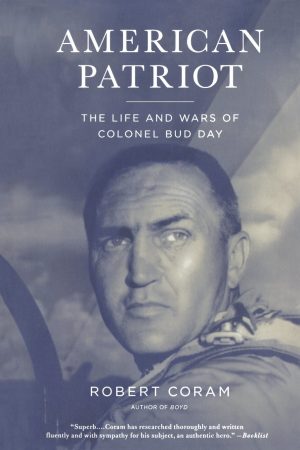 Honor. Courage. Commitment. These are the core values of the United States Marine Corps. Every Marine learns about them either in bootcamp at Parris Island or San Diego or Quantico for officers. The Marine Corps and the U.S. military put a premium on these values. They are the hallmarks of service that sets military men and women apart from civilians.

I believe that these values need to be reinforced. Core values are like muscles that atrophy unless we commit to them and actively think about them. With that in mind, I picked up an amazing biography, American Patriot: The Life and Wars of Colonel Bud Day, which

is a 24-hour fitness of core value training.

Colonel Bud Day (USAF) is not a household name. Perhaps Air Force personnel are more familiar with him. However, he did serve as a Marine during World War II. Although this Devil Dog had a less than stellar career. In fact, he was the subject of a court-martial. Nevertheless, he joined the Air Force, and became a pilot. He found a renewed commitment to service in the Air Force, and it was as a pilot that he would build his stellar legacy. Indeed he became one of the most decorated American veterans in history.

American Patriot is the story of a man from the heartland of America (Iowa), who volunteered to serve not just in one, but three wars. He served in World War II, Korea, and Vietnam. Robert Coram, the biographer, paints a picture of a man, Bud Day, who saw service and loyalty to his country as a way of life. No questions asked. There was no conscientious objecting. It was simply a matter of pride and patriotism.

Furthermore, Colonel Day had a great family and a successful law career when he decided to serve specifically in Vietnam. Consider the following quote:

“To a civilian, it seems bewildering at best, callous at worst, that a forty-one-year-old man with four children- three of them in diapers- would ask to go to war. But such is the nature of the warrior; a warrior rushes toward- not away from- the sound of the guns.”

Additionally, Colonel Day’s wife had started a profitable business too, and the couple had many lucrative real estate investments. Bud Day had a lot to lose, yet he still volunteered to serve.

But, that is where the story begins. It wasn’t enough for him to simply serve as a field grade officer where he could have found an easy assignment somewhere far from the front lines of armed combat. Instead, Bud Day commanded an elite, top-secret fighter squadron- the Mistys. Their missions were some of the most dangerous of the Vietnam War. The Mistys bombed high value targets in the North. Bud Day’s role as commander wasn’t a cushy staff officer job. He was on the front lines flying every day. He was leading by example, and his unit loved him.

Coram explains it as follows, “When a Vietnam-era fighter pilot says he flew up north, that means he ripped off the front gate of hell and flew into the deadliest air-defense system ever devised.” As a result of the danger and constant challenge of the mission, Colonel Day and his fellow pilots returned from each mission knowing a “marrow-deep fatigue that came from being shot at hundreds of times in the past five hours.” (And I thought I was tired after staring at a computer all day!)

If the story sounds like that of the late Senator John McCain, then here is where things get interesting. Colonel Day was McCain’s cellmate. The two warriors “bunked” together at the Hanoi Hilton.

Like McCain, Colonel Day was shot down and captured in Vietnam. He nearly escaped at first. The author paints an amazing story of his daring escape. As much as I rooted for Day to make it, I was halfway through the book and knew the inevitable was coming. Colonel Day was captured again and sent north. Furthermore, knowing he nearly escaped, the North Vietnamese wanted revenge.

Let me say this up front. The scenes in the book are gruesome. To say that Colonel Day had the shit pummeled out of him is an enormous understatement. I thought the Saw movie series was intense. Those torture scenes don’t hold a candle to what Coram describes. The treatment of American POWs in North Vietnam remains disgraceful. Colonel Day’s story retells much of that harrowing experience.

But, the amazing part of the book is the resolve of the American fighting men in it. The reader will feel an enormous amount of pride and patriotism knowing that our country has such great men. Colonel Day’s honor and resolve is unbelievable. The oft-repeated refrain of the book is “Return with Honor.” It sustains Day and others. It becomes the rallying cry in the face of so much hardship.

It is unfortunate the extent to which honor has become equated with something antiquated and primitive. Distortions of honor exist to be sure. But, the book paints the nobler side of honor. This is the type of honor that is about commitment to a cause greater than oneself and a resolve to never give up on one’s country and mission. The Code of Conduct is the backbone behind it.

For Colonel Day and his fellow prisoners, they saw adherence to the Code of Conduct and doing their duty as their primary mission while in captivity. Consider the following quote, “They pressed on with their duty as they saw that duty. While the world might think of them as prisoners of war, they thought of themselves as prisoners at war.” The fighting didn’t stop for them. There was no quit in these men simply because they were POWs.

However, not all of the POWs valued honor and duty the same way. The book shows a divide between two groups of POWs. Twelve POWs returned early before Day and the others. Colonel Day and his fellow POWs that endured the entire imprisonment until the Spring of 1973 scorn these twelve early released POWs. It becomes a source of enormous tension after the War. It may seem difficult to fathom such a bitter divide. But Coram does a good job providing the context and history behind it. In the end, it comes down to honor and doing one’s duty. Colonel Day firmly believed that the twelve early released POWs forsook that duty and compromised their honor.

Colonel Day’s release from captivity isn’t the end of the story. He led an amazing life beyond his time of uniformed service. As previously mentioned, he was a lawyer. He was successful before the Vietnam War, and he would prove to be equally if not more successful after it. He achieved amazing financial success. Think more real estate properties and new Cadillac type of success!

However, his training as a lawyer led him into a role in which he went toe to toe with the government in court. The issue at hand related to medical benefits for retirees. The story is one in which military retirees were denied their benefits in the 1990s under President Clinton. Colonel Day decided to challenge the government in court over this issue despite being in the latter part of his life with poor physical health and recurring nightmares from Vietnam. It’s an amazing bookend to an already distinguished career. Robert Coram paints Day as a man committed to service until the end.

A good biography can not only illuminate different periods of history, but also inspire us. Colonel Day’s story motivated the hell out of me. It is like reading about other instances of American bravery and hardship because it challenges the reader to wonder, “Could I do the same under those circumstances?” While I was reading the book on a couch with a beer in air-conditioning, I thought about this question several times. At the very least, it is a biography that compels us to pause, reflect, and be grateful to live in a country where such brave men and women are willing to take up arms, do their duty, and uphold their honor. Colonel Day was one of those amazing individuals. America is grateful for them.