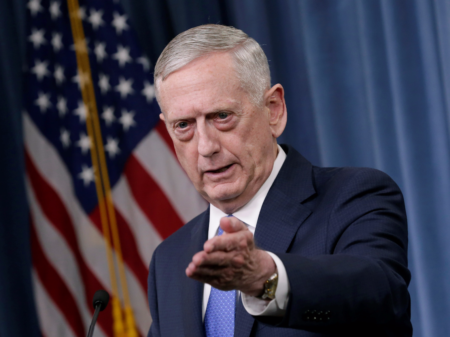 The following video is an update from Defense Secretary James Mattis on the “accelerated” campaign against  ISIS. Below are several highlights from the address from May 19, 2017, and some analysis. Secretary Mattis begins by describing two “significant” changes that have been directed from the President:

Change #1: Delegation of authority to the “right” level to quickly move against “enemy vulnerabilities.”

Analysis: The military and the Marine Corps (where Secretary Mattis served for 40+ years) are strong advocates for the principle of decentralized execution. I’ll provide some clarity on this with a very broad and generic summary of how this might look at the tactical, operational, and strategic levels of war. At the tactical level, this means small unit leadership executes plans and makes decisions to accomplish a mission. The tactical level is typically led by NCO’s and company grade officers at the team, squad, and platoon level. The operational level, for example, may refer to battalions and brigades conducting campaigns, which we know generally as deployments. For Marines, this would be the equivalent of a MEU, UDP or SPMAGTF. The strategic level refers to delegation to Combatant Commanders to make decisions in their area of operations. Thus, at the tactical, operational, and strategic levels, planning is “centralized,” but the execution and decision making are ultimately conducted by those who are closely involved in the execution of the plan i.e. the squad on patrol, the battalion on a MEU, or the combatant commander overseeing his area of responsibility, which would be central command or CENTCOMM in the case of Iraq and Syria. Marines such as Secretary Mattis understand the importance of making decisions at the lowest possible level to generate tempo and to be quicker than one’s enemy. If this sounds a lot like Colonel Boyd’s OODA Loop cycle then it’s important to note that Boyd had a major impact on the Marine Corps’ doctrine of Warfighting. In delegating responsibility, the goal is to allow leaders closest to the fight to make critical decisions that will put pressure on the enemy and to maintain pressure until the enemies’ will to fight breaks down.
Change #2: Secretary Mattis describes a tactical shift from “an attrition” fight to surrounding the enemy in their strongholds in order to annihilate ISIS and “prevent the return home of escaped foreign fighters.”

Analysis: Marines believe in the principles of maneuver warfare rather than attrition. A basic definition of attrition is war based on trying to exert more force against the enemy and overwhelm them with a mass of troops and equipment. An example of this is often cited in World War I style trench warfare. Another example of attrition would be the use of body counts in Vietnam. This is a way of trying to kill more enemy than friendly forces. The attrition style of warfighting is anathema to the Marine Corps’ principle of maneuver warfare (perhaps this is why you may have noticed the inflection in Secretary Mattis voice during the address when he mentioned “attrition”). Maneuver warfare is based on putting the right people in the right place at the right time to attack the enemy from a position of advantage. From a position of advantage, one can shatter the enemies’ cohesion and destroy their will to fight. With maneuver warfare, one does not necessarily have to kill the enemy (although that is often a significant part of it). Maneuver warfare is often confused with movement (although movement can be a part of it). But, the best way to understand it in this context is the necessity to get coalition forces into a position where they can put the enemy in a no win solution and convince the enemy that their cause is hopeless. The enemy may realize this the hard way as conventional munitions explode on or around him. It can also occur through psychological and information operations too. What Secretary Mattis is suggesting is that coalition forces are putting the enemy in a no-win situation where the only options they have are to surrender or die.