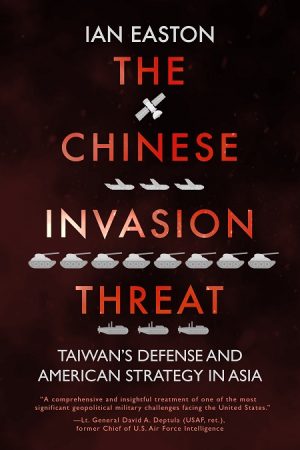 Name the only European country that has formal diplomatic relations with Taiwan? That is a good nugget of trivia. Perhaps when bars re-open and people socialize again, it will be a good one to keep in reserves. Answer: The Vatican.

How do I know this? I picked up a fascinating, yet sometimes scary book by Ian Easton on the topic of Taiwan. More specifically, the capability of Taiwan to defend itself against a Chinese invasion. The book is appropriately named The Chinese Invasion Threat.

The level of detail is remarkable. Mr. Easton has done his homework. He has a strong grasp of history and current events. He draws on countless hours of research and thousands of pages of sources. He has studied the People’s Liberation Army doctrine to the extent of its availability to gain insight into what he declares is the People’s Republic of China’s (PRC) long-term objective to invade, control, dominate, and rule Taiwan.

The history begins with the Chinese Civil War between the Communists under Mao Zedong and and the Nationalists under Chiang Kai-shek. The Nationalists lost and were forced from the mainland to a string of islands off the coast with the largest one being the island of current day Taiwan (then Formosa). Over the years, the Chinese Communists sought to conquer Taiwan. However, they were consistently deterred by the difficulty of the mission, and America’s willingness to intervene.

It should be noted that Taiwan and the Taiwanese consider themselves the Republic of China aka “ROC.” They believe that they are the rightful Chinese government. Although they have abandoned their claim to the Chinese mainland.

Over the years, Taiwan has built up defenses and lived with the constant threat of an invasion. What we learn from Mr. Easton’s book is how difficult an invasion would be for the PRC. Indeed, the conditions would have to be just right. Furthermore, the mobilization and logistics would be hard for the Chinese to conceal. Mr. Easton spells out these complexities in careful detail.

Additionally, the weather would have to cooperate as the Taiwan Straight is perilous for ships to cross. It is often impassable for amphibious operations. The Taiwanese terrain and beaches present many other difficulties. Taiwan is mostly mountainous, and the mountain ranges are extremely tall and treacherous for any military movement. Finally, the manmade features built on Taiwan are all heavily reinforced with steel and concrete. Taiwan often gets hit with typhoons and the structures have been built to withstand the onslaught of nature. Thus, the island is well defended with natural and manmade obstacles.

In the big picture, it is ironic and sad that Taiwan does not have diplomatic recognition by the rest of the world. It is a democracy with a free society. It is also the United States’ 10th largest trading partner. Its economy is highly technical as it makes many electronic components including chips for Apple iPhones. Nevertheless, U.S. relations with Taiwan evolved and were solidified in the 1978 Taiwan Relations Act under President Jimmy Carter. In this relationship, America supports Taiwan with military equipment and expertise. It also supports Taiwan with an implicit guarantee of military protection. However, there are no formal diplomatic relations.

Mr. Easton’s book is a must read especially for U.S. Marines. As the Marines look to the Indo-Pacific region for current and future operations, this book is worth studying. Mr. Easton describes the flashpoint between China and Taiwan as one of the most consequential national security issues that America faces. The strategic importance of Taiwan cannot be understated. It is true that while China is militarily aggressive, they are waging war on many fronts. These fronts include cyber, political disinformation, economic pressure, and espionage.

Finally, while Mr. Easton published his book in 2017, it is even more relevant in 2021. The year 2020 saw an increased amount of PLA aggression against Taiwan. The PLA continues to push the boundaries and test the Taiwanese. Thus, it is crucial to study and know what is coming. Mr. Easton’s book is a strong warning. The question is will America’s national security decision makers heed this warning in time to stop the Chinese invasion?

Check out the book-

Also check out the podcast interview.