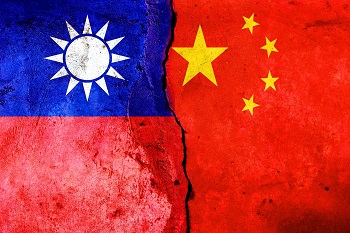 In this episode of the PME podcast, I speak with Ian Easton about the threat of China invading Taiwan. His book is called The Chinese Invasion Threat: Taiwan’s Defense and American Strategy in Asia

. We chat about the history of Taiwan and its conflict with the People’s Republic of China. Ian details the longstanding ambitions of the PRC’s military, the People’s Liberation Army (PLA), to come up with plans to invade and conquer Taiwan. Check out the podcast and learn about what Ian calls the most consequential foreign policy challenge that America currently faces.

Taiwan calls itself the Republic of China (ROC). After the Chinese Civil War (1927-1949) that took place between the Communists and the Nationalists under Chiang Kai-shek, it was ruled by the Nationalists that lost the Civil War to Mao and the Communists. Taiwan no longer claims the Chinese mainland as its territory. However, it does consider itself the rightful China.

Additionally, Taiwan has developed as a free and democratic government. Unlike the PRC, it is not an Orwellian police state influence by Marxist-Leninist ideology. Therefore, it is ironic that it does not have diplomatic recognition from any European country other than the Vatican. Over the years, the world has been forced to take sides. The PRC has proved to be a more valuable economic partner and has been able to force the majority of countries to take its side.

Taiwan and the United States

The United States was always willing to come to Taiwan’s aid militarily throughout the Cold War. In 1978, the U.S. signed the Taiwan Relations Act. The major stipulation of the act was that the U.S. would continue to supply Taiwan with military arms and equipment and an implicit guarantee at military protection. However, Taiwan is not a treaty ally in the same way that South Korea and Japan are U.S. treaty allies.

Taiwan maintains an important geographic position in the Pacific. If it were to fall, it would jeopardize the safety and sovereignty of other treaty allies in the region. Additionally, China has sought to claim large swaths of the South China Sea to the south of Taiwan. These territorial claims have led to many aggressive actions on the part of the PRC to build military bases and challenge other governments like the Philippines.

Additionally, Taiwan is America’s 10th largest trading partner. It makes advanced equipment such as microchips that power iPhones. As a result, the U.S. has a strong economic interest in Taiwan. Also, Ian claims that there are roughly 79,000 Americans who are currently working or traveling throughout Taiwan at any given time.

Why hasn’t Taiwan been invaded yet?

Taiwan is significantly overmatched militarily. In terms of raw numbers, it is a country of only 24 million people. Compare that to the PRC’s 1.3 billion people! Taiwan does not possess any nuclear deterrent capabilities.

While they may be outnumbered, Taiwan still has many advantages. First, the PLA does not know what the U.S. will do. The possibility of U.S. intervention and other countries coming to Taiwan’s defense is a consistent deterrent. Second, the Taiwan Straight is extremely difficult to cross. Even though it is a short distance, the waters can be treacherous. Third, Taiwan has a professional military and they have been able to build up their defense capacity since World War II. During World War II, the U.S. made the decision that Formosa (aka modern day Taiwan) was untenable for an invasion. The reasoning was that the casualties would be too high. Ian explains that a lot of the considerations during World War II remain in play for the PLA today. For example, Taiwan is one of the most mountainous islands in the Pacific.

Under Xi Jinping, China has become more hostile. They have expanded their military into what they claim is their territory in the South China Sea. This includes artificially constructed islands that serve as military outposts. Additionally, the PLA has grown significantly. China has made significant investments in its military and especially its Navy.

Ian also explains that in 2020 China has become more aggressive against Taiwan and challenged Taiwan’s military defenses. On top of the military aggression, there are other domains in which the PRC seeks to lay the groundwork for an eventual invasion. They use cyber space, economic leverage, political disinformation, and espionage. There are many fronts in which they are trying to assert their influence and play the “long game” before invading. As a result, Ian says China’s number one war plan is an invasion and occupation of Taiwan.

The Chinese Invasion Threat is an important book to study. Ian goes into a lot of detail and specifics not covered in the interview. This is a crucial issue for military and national defense planners. The Marine Corps continues to focus on the threats in the Indo-Pacific. For more information on this topic, my interview with Lt Col Cuomo gives an in depth look at the Marine Corps’ focus under General Berger’s planning guidance.