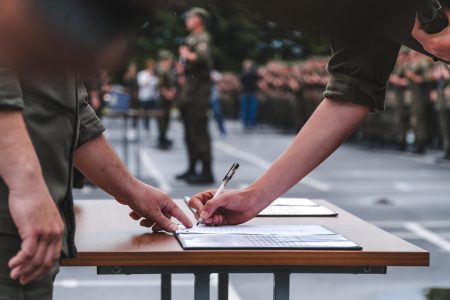 The Past Crisis of Military Recruiting

During this time, morale plummeted. Desertion increased. Continental soldiers were imprisoned by the British. Compounding the Army’s bad fortune, enlistments were nearing expiration on December 31. Overall American troop strength had declined from 9,000 at Brooklyn Heights to around 2,400 by December. As the year 1776 came to an end, General Washington had a serious recruitment problem.

The Revolutionary spirit that had inspired many colonists to join the fight was looking bleak in the face of a powerful enemy. What caused morale to plummet was the reality that the enemy was winning. Defeat weighed heavy on the minds of those who chose to fight. No one wants to be on a losing team however noble the cause might be.

Overcoming the Past Military Crisis: A Clear Cause and Winning

On the eve of the Battle of Trenton, Thomas Paine wrote The American Crisis. This brilliant pamphlet was meant to help with recruiting and retaining soldiers. It begins with the classic line, “These are the times that try men’s souls.” It was first published on December 19, 1776 and read aloud to Washington’s soldiers on December 23. Thomas Paine’s writing was clear and passionate. It articulated the reasons to fight and possibly die for the cause of independence.

Paine’s tract is often viewed as an influential recruiting tool. However, The American Crisis would not have had the impact on recruiting without the events that followed several days later. Washington’s famous crossing of the Delaware took place on Christmas night in 1776. The Battle of Trenton occurred early the following morning. It was a bold attack that caught the Hessian forces by surprise. General Washington needed it to regain momentum and secure enlistments. The decisive victory at Trenton was followed by another victory at the Battle of Princeton.

As Washington’s forces encamped for the winter at Morristown, New Jersey, winning two important battles helped shore up the manpower shortages needed to sustain the fight for independence. Revolutionary fervor can easily be snuffed out under crushing defeat. But it can just as easily be re-kindled through the sweetness of victory. Victory restored trust and confidence in Washington’s leadership. It also motivated Americans to continue fighting for the cause of independence.

The Present Crisis of Military Recruiting

Amidst the many hot takes on why the Army and the military more generally has a recruiting problem, no one has seemed to focus on the simple fact that the United States just lost a war. We waged a war against the Taliban. Their political goal was to wrest control of Afghanistan. The American goal was to displace the Taliban and install a pro-American regime.

When the last American plane left Kabul, the Taliban was in charge and the American backed regime was not. Furthermore, the withdrawal was poorly planned by American civilian and military leaders alike. This resulted in a nightmare scenario in which the Taliban surrounded and provided security at the Kabul airfield. American forces scrambled to evacuate U.S. civilians as well as thousands of Afghans. The culmination of this poor planning and lack of foresight tragically led to the deaths of 13 U.S. servicemembers.

The withdrawal was a debacle. The collateral effects of an embarrassing loss continue to be felt in the military’s inability to enlist new talent. While this is mere hypothesis, it makes more sense than all the punditry over tight labor markets or young Americans being too fat. While young Americans might indeed be too fat, the skinny ones apparently do not want to be soldiers. Why is that? Is it really because the Baskin-Robbins is offering a more competitive sign-up bonus? Free ice cream at the end of the mall shift? That might enlarge the recruiting pool, but not in the way that the military would want.

What are we fighting for?

A new National Security Strategy (NSS) document was published on October 12, 2022. Curious readers will yawn through it. There are no sentences that strikes the emotional note or the sense of purpose found in Thomas Paine’s The American Crisis. Perhaps it is because the NSS doesn’t even recognize the nature of America’s current crisis. Indeed, the document’s lack of awareness is symptomatic of our current crisis. The NSS is more concerned with climate change than the security of America’s citizens. If one wonders why Army recruiters are not fielding hundreds of inbound calls, its probably because prospective soldiers are not willing to take up arms to get the earth’s temperature a half Celsius lower.

The NSS does not adequately define America’s national interest. This is partially because it reads like it was written in Davos at the World Economic Forum. It’s concerned with global interests and attempts to fit America somewhere in the middle. While not everything can be defined as a national security problem, there is a strong case to be made that over 107,00 people dying from drugs in 2021 might be one of them. But there is no consideration of the suffering caused by fentanyl deaths. Nor is there any acknowledgement that the illicit drug trade coming across an unsecure border might be a national security matter.

It’s clear that Americans don’t remember what victory feels like. We cannot imagine the sensation of joy in the Battle of Trenton’s aftermath. When June comes around, Americans throw parades for LGBTQ causes but no one throws a parade or celebration to remember victory at the Battle of Normandy. The largest amphibious invasion in U.S. history began on June 6, 1944 and was fought throughout June at tremendous cost. If June were military pride month, and Americans celebrated winning battles with red, white, and blue parades then perhaps recruiters would get more of their calls returned.

The reality is that we have lost our national pride in ill-conceived wars. In several of these wars, the endstate was both poorly planned and not supportive of American national interest.  To compound these problems, American politicians are bungling into a similar trap in Ukraine. Most people intuitively understand that this is the same movie that played out after 9/11. Crisis happens. Emotions run hot. Shoot first, ask questions later. Maybe it would be wise to ask the right questions first and plan accordingly.

Did any of the adults in the room at the National Security Council or Joint Chiefs of Staff think about the impact America’s disastrous withdrawal from Afghanistan might have on recruiting? Probably not. After all, this is a tertiary effect and one that the military brass can brief away with talking points about tight labor markets and pudgy kids. One can assume that there is probably a Power Point brief at the Pentagon with a line graph showing that the kids are fatter now versus 1990. Perhaps kids are overweight, but they are not motivated to get skinny and join the Army. Nor are they eager to dig a foxhole to patch up the ozone layer or import democracy to countries that have only known corruption for hundreds of years.

The military needs to redefine its purpose as winning wars that are in America’s national interest. No amount of slick ads starring a soft-spoken sorority girl with disabled lesbian moms will boost their numbers. The problem is not that recruits do not “see themselves” in the military. People want to see themselves on a winning team and feel like a winner personally and professionally. Furthermore, they want to win in a cause that advances the well-being and security of the people they love. Why should a seventeen year old senior from Ohio care about Afghan girls going to school when his big brother just overdosed on fentanyl? According to the NSS, he would be better off installing solar panels anyhow.

The military and its civilian leadership need to stop emulating the corporate HR departments and the DEI administrators running roughshod over college campuses. They are overdue for lessons in history and human nature. There was another development in George Washington’s recruiting pitch. In an effort to retain soldiers, his tone softened. He addressed them as men and Americans. He eschewed previous formalities. Ron Chernow writes in his biography of Washington, “The war was molding him into a far more egalitarian figure” (Chernow 278).

At the start of 2021, the military conducted stand down training focused on “extremism” in the ranks. As recently as August 2022, the Commander-in-Chief labeled “MAGA Republicans” extremists. There are a lot of active military members that voted for Trump and would likely do so again. Many probably share memes of Joe Biden looking goofy. They probably like guns and want to own more of them. Many go to church and love their country. Perhaps that makes them both Christian and Nationalist i.e. Christian Nationalists. Which part of that speech was meant for them and recruits that might think like them?

Instead of giving a divisive speech, imagine if the Commander-in-Chief went on a speaking tour across the country to urge young people to enlist and active military to re-enlist. He could simply quote the words of George Washington: “My brave fellows you have done all I asked you to do and more than could be reasonably expected. But your country is at stake, your wives, your houses, you will render that service to the cause of liberty and to your country which you probably can never do under any other circumstances” (Chernow 278).

The present recruiting crisis is real. It needs more attention than it is getting. Just like in 1776, it will only be solved with a combination of boldness, humility, and leadership.