The Iranian Revolution was one of the most transformative events in the history of U.S. foreign policy as it dramatically reshaped geopolitics in the Middle East. Prior to the overthrow of the shah’s regime, Iran had been a steady and reliable ally of the United States. The alliance was part of the United States’ Cold War strategy, and Iran served as a useful buffer against Soviet interests in the Middle East. But, by 1979 change was coming quick and the entire paradigm was about to shift. The U.S. was caught on its heels by the swift and sudden rise of Ayatollah Khomeini, who returned from political exile in Paris. Khomeini’s writings revealed a deep animosity and bitterness towards America, which he dubbed the “Great Satan.”

In his book Guests of the Ayatollah, Mark Bowden writes of the revolution, “Like most of the great turning points in history, it was obvious and yet no one saw it coming.” He continues to explain the dynamics of global diplomacy and western diplomatic strategy that drove the Iranian population’s angst and hatred toward America. What happened was a revolutionary fervor rooted in radical Islamist ideology. This ideology gained support by directing the subject of its ire at the United States, the nefarious outside enemy, who according to the revolutionary narrative had been the cause of the people’s woes. The laundry list of grievances was long, and began with support for Iran’s monarchy in the figure of the shah, Mohammad Reza Pahlavi, who was treated for cancer in the U.S. At that time, President Jimmy Carter allowed him to stay in America, which upset the population that opposed him. The shah had been in power since 1953 when a coup d’état had been staged and financed by the Central Intelligence Agency (CIA). The coup overthrew Premier Mohammed Mosaddeq, who was intensely nationalist and hostile toward British and American oil and business interests. With the shah placed in power, the U.S. increased its funding in Iran’s economy and military. Shortly after the shah returned to power, President Dwight D. Eisenhower delivered a milestone speech to the UN General Assembly on December 8, 1953. The speech was called, “Atoms for Peace,” and it laid out a plan for civil nuclear development. From this initiative began construction of a nuclear reactor in Tehran in 1967. From the speech:

It is not enough to take this weapon out of the hands of the soldiers. It must be put into the hands of those who will know how to strip its military casing and adapt it to the arts of peace.

The United States knows that if the fearful trend of atomic military buildup can be reversed, this greatest of destructive forces can be developed into a great boon, for the benefit of all mankind.

Other historical sources of Iran-U.S. animosity have included America’s backing of Sunni Gulf states. This dynamic still plays a deciding factor in Middle Eastern politics as Sunni Arabs represented in Gulf states like Saudi Arabia oppose the Persian Shia influence of Iran. The struggle between Sunni and Shia states trying to assert power in the region has played out in conflicts in Yemen and Syria. In Yemen, a civil war has raged for two years in which Iran has supported the Houthi rebel movement against the government of President Abdrabbuh Mansour Hadi, who is backed by a Saudi led coalition that has carried out airstrikes in which more than 7,600 people have been killed and 42,000 injured since March 2015 (BBC report).

Finally, Iranians saw American influence as corrupting their society, culture, and, most importantly, their religion. Western values of liberalization and gender equality were strongly denounced in Iran during the time of the revolution. Khomeini was able to galvanize his base of support with the narrative that American influence was promoting decadence and dissolving the moral fabric of Iran. Thus, as the number of anti-government protestors grew, as the military attempted to crack down on dissidents, as the shah went into exile, and when Ayatollah Khomeini returned to Iran, the stage was set for a revolution.

The events of the Iranian revolution led to protests outside of the American embassy. The embassy in Tehran inflamed the resentment that had been part of the protests and violence that brought about the Islamic Republic. Ayatollah Khomeini did not relent from his opposition towards America, and it would become the central policy position that drove the revolution within Iran and beyond. It is important to understand that the Iranian Republic views the revolution as an ongoing process, and as one that must be spread and exported abroad. As a result, Iranian foreign policy, which is driven principally by the Islamic Revolutionary Guard Corps (IRGC), to this day remains committed to expanding Ayatollah Khomeini’s revolutionary vision. 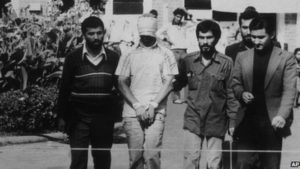 crisis was one of the worst foreign policy crises in American history. The history of this era and the crisis has been revived thanks in part to the feature film Argo (2012) in which Ben Affleck  played the lead role and also directed the movie, which won an Academy Award for best picture. In the film, an undercover agent stages as a film producer for a space movie to be filmed in Iran. The space movie is a ruse for a plot to free six Americans trapped inside the country. The movie is based on a true story. But, the story of the hostage crisis began on November 4, 1979 as student protestors scaled the walls of the embassy compound and broke inside. From there, they proceeded to kidnap fifty-two Americans within the embassy. President Carter’s administration watched helplessly as reports emerged of the fifty-two American diplomats and citizens being taken in 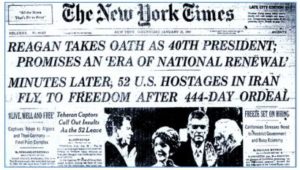 to Iranian captivity. The hostages were paraded blindfold in front of cameras for the world, and America to see. This became the longest hostage crisis in world history. For a total of 444 days from November 4, 1979 until January 20, 1981, Americans were held captive in Iran. The issue would become a political black eye for President Jimmy Carter, who lost his re-election in 1980 to Republican Ronald Reagan. To make the situation worse for President Carter, the hostages were released no more than a minute after President Reagan took the oath of office and was officially sworn in. The message was clear, and meant to display retribution for the decision to grant the shah asylum in the U.S.

During the crisis, one significant rescue attempt was made in what also became a black eye for military special operations. The rescue attempt was called Operation Eagle Claw in which U.S. commandos planned to free the hostages Tehran on helicopters. Complications occurred before the helicopters could reach their objective. As the helicopters flew low to avoid Iranian radar, they encountered a sand storm and the mission had to be aborted. Additionally, eight U.S. service members were killed and others were injured when a helicopter ran into a C-130 during refueling operations. No other significant rescue attempts were made. The administration continued to negotiate for their release.

Despite the hostages being freed on Reagan’s first day as President, Iran-U.S. relations remained tense and bitter throughout his two terms. Iraq invaded Iran shortly after the revolution, and the U.S. backed Saddam’s war against Iran. Furthermore, Iran would continue to pursue its revolutionary agenda in countries like Lebanon where terrorist attacks caused by Iranian proxies, namely Hezbollah, claimed the lives of many Americans to include 241 Marines in the devastating 1983 Marine Barracks bombing in Beirut.

To this day, American and Iranian relations remain tense, although currently held together with a fragile nuclear agreement negotiated in July 2015. Nevertheless, the history of the revolution and the hostage crisis continue to loom large in the consciousness of Americans and Iranians. The distrust and animosity does not appear to subside anytime soon. Indeed, with stepped up American military operations in Syria and Iraq as well as Iranian proxies active in the form of the IRGC’s Quds force, the prospect of better U.S.-Iran relations does not look promising anytime soon.

Below is a great documentary on the Hostage Crisis.

For more information check out Mark Bowden’s book, Guests of the Ayatollah: The Iran Hostage Crisis: The First Battle in America’s War with Militant Islam

Another great book is by David Crist called, The Twilight War: The Secret History of America’s Thirty-Year Conflict with Iran

Finally, be sure to check out Episode 6 of the PME podcast with Jay Solomon on his book The Iran Wars: Spy Games, Bank Battles, and the Secret Deals That Reshaped the Middle East