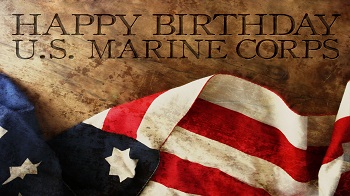 In early American history, taverns were a natural hot bed of political activity. Before the internet and social media, a man’s “tweet” was slurred over a pint in drunken utterances. My guess is they were more than 240 characters too.

One can imagine the raucous and rowdy gatherings in low lit pubs with people cramped elbow to elbow. The latest rumor passed from one man’s lips to another man’s ear. Imagine the whispers of gossip and intrigue. The spreading of rumors both real and imagined went viral in those taverns.

Has much changed since then?

Bars remain a fixture in American life. But, they are a place to catch a sports game, and not the latest news. Now, the news is found on an iPhone and the rumor goes viral on social media. So, the answer is yes. A lot has changed.

But, many of our proud institutions remain. Among them is one of the greatest in military history. From the heart of Philadelphia in a place called Tun Tavern, the Marine Corps was born. On this day, November 10, the Marine Corps celebrates 245 years since its inception.

The Marine Corps is Born

On November 10, 1775, the Second Continental Congress authorized two battalions of Continental Marines through a Congressional act.

The first commissioned officer was Captain Samuel Nicholas. He was also the first Marine recruiter. I like to imagine that as the first Marine battalions were sailing to invade the Bahamas, there was at least one young Marine saying, “My recruiter lied to me. He promised a nice cruise vacation to the Caribbean.” Nevertheless, when the Marines landed in Nassau, it was game on. They fought with rifles and bayonets and started a proud tradition of hooking and jabbing from ship to shore.

When the Revolutionary War was over, the Marine Corps was temporarily disbanded. But, this did not last long. Alas, the young American nation knew that from the rugged frontiers of the American wilderness and the hard streets of American port cities, the nation still needed a place for its rowdy young citizens to prove themselves in combat. The Corps was destined to return!

The Marine Corps is Re-Born Hard

On 11 July 1798, the Marine Corps was brought back to life when Congress passed “An Act for Establishing and Organizing a Marine Corps.” Some interesting facts from the act. At the time, a Major’s pay was set at $50 per month and three rations a day. But, no BAH (housing allowance). Things were tougher back then!

I also noted the following part of the act:

The non-commissioned officers and musicians, who are or shall be enlisted into the army of the United States, shall be, and they are hereby, exempted, during their term of service, from all personal arrests, for any debt or contract.

Someone needs to let the car dealers and loan sharks from Oceanside to Jacksonville know about that one!

It was not long after the Marine Corps came back in blue that many of the Marines would be back on ship. To this day, Marines still deploy abroad on Navy ships. In the days in which they sailed in search of Barbary pirates, I have to wonder the most critical question. How was the weight room on the ship? I wonder if Marines back then also fought with the Sailors for a spot on the bench press.

If they did, then it didn’t last long. The early Marines were soon storming to the shores of Tripoli and making history. Of course, this is a reference to the expedition of First Lieutenant Presley O’Bannon. During the First Barbary War in 1805, Lieutenant O’Bannon led a small group of Marines and other allies to capture the city of Derna on the shores of what is today known as Libya. But, back then it was Tripoli, which is great because the “shores of Libya” would not sound nearly as good in the Marines’ Hymn.

The 19th Century provided some rich, yet overlooked Marine history. Some of the battles making the highlight reels are as follows:

While the 1800s does not have as many battles as the 20th Century, it can claim the “Grand Old Man of the Marine Corps.” This was the Century of Archibald Henderson. Colonel Henderson served a whopping 53 years in the Marine Corps. He was the Commandant from 1820 to 1859 (that’s a lot of NJPs!). But, he is also credited with one of the more colorful quotes in Marine Corps history. Apparently he left a note on his office door before heading south to fight Seminole Indians in Florida and Georgia.

Gone to Florida to fight the Indians. Will be back when the war is over.

The Marine Corps’ reputation was sealed during World War I and World War II. Let’s start with the First World War. This is the war that earned Marines the nickname “Devil Dogs”. It came from the German word “Teufelshunde.” This is the way the Germans described the Marines. Who can blame them? From dashing across the fields of Belleau Wood and battling other hard to pronounce French cities like Soisson and Chateau-Thierry, the Marines of World War I were a force of reckoning.

Come on, you sons of bitches- do you want to live forever?

And what Marine wouldn’t have charged into German machine guns at Belleau Wood? It was either that or face the wrath of a Gunny that was awarded the Medal of Honor not once, but TWICE. Gunnery Sergeant Dan Daly spat fire and led Marines with the best of them. The Germans didn’t have a chance.

During World War II, the Marines primarily fought in the Pacific against the Japanese Empire. While many people know that the U.S. Army and American allies pulled off one of the largest amphibious invasions in American history. The Marines did a lot more amphibious invasions and on some of the most brutal terrain consisting of sharp rocks and craggy atolls.

In what became known as the “island hopping” campaign, U.S. Marines invaded small Japanese controlled island atolls across the Pacific. These invasions led up to one of the most consequential in Marine Corps history at the Battle of Iwo Jima beginning February 19, 1945. An invasion force of 70,000 Marines landed on the volcanic island and fought for 36 days across and in the process raised the U.S. flag on Mount Suribachi in what is now the most iconic picture ever taken. Admiral Nimitz was also quoted saying that among the Marines “uncommon valor was a common virtue.”

In the aftermath of World War II, the Marines remained busy. The Cold War began and the Marines had plenty of work to do. These wars were not easy, and the battles were not always decisive. But, the Marines did what the nation called them to do.

During the Korean War, the Marines made a name for themselves during the freezing cold at the Battle of Inchon. This is the battle where the famous Marine General Chesty Puller quipped, “We’re surrounded. That simplifies things. We can shoot in any direction.”

From 1965- 1972, the Vietnam War was another war that challenged the Marine Corps. Among the more famous battles of Vietnam was the Battle of Hue. This was one of the first times in American history when the Marines engaged in urban combat.

The next major war that involved the Marines took place in the early 1990s with Operation Desert Storm and Desert Shield. This was one of the first times that the Marines fought against Saddam Hussein and his Revolutionary Guard. But, it was not the last. In 2003, the Marines returned to Iraq as part of Operation Iraqi Freedom (OIF). At the same time, Operation Enduring Freedom (OEF) in Afghanistan was taking place. Indeed America has called on its Marines to take a large role in the Global War on Terror.

Looking Ahead to the next 245

While the last 20 years have been dominated by the Global War on Terror, the Marine Corps finds itself in a familiar position. Once again it is fighting to be relevant and to prove that the nation needs its Marine Corps.

General Berger is the current Commandant of the Marine Corps. He has laid out ambitious plans to get the Marine Corps back to its amphibious roots. He has recognized that the Indo-Pacific region remains one of the most contested parts of the world as the U.S. sees China as a strategic competitor.

To that end, General Berger has made big changes to include abandoning the Marine Corps’ armor capabilities. For more on the strategic direction of the Marine Corps, the interview with Lt Col Cuomo is a must listen.

On November 10, 2020, the Marine Corps celebrates 245 years of rich history. Units will gather for Marine Corps Birthday Balls. These are always a good time and also a chance to see the Lieutenant try to dance and the Lance Corporals try to out drink the Company Gunny. There will be a lot of headaches on November 11!

The traditions of the Birthday Ball include 13th Commandant General John A. Lejeune’s birthday message to recognize November 10 as the official Marine Corps birthday. There is also a message from the current Commandant of the Marine Corps. Also, the oldest and youngest Marine both receive the first two pieces of cake. Marine Corps units celebrate the birthday all over the world even while deployed. The birthday is a continual source of pride in the legacy and tradition of America’s finest fighting institution.

Ways to Celebrate this Year

For veterans, there are many ways to network and meet with other Marines and veterans. Organizations like the VFW and American Legion exist throughout the country and routinely host events and celebrations to commemorate days like the Marine Corps’ birthday.

If you are on the West Coast, I highly recommend a visit to the Marines’ Memorial Hotel in San Francisco, CA. The hotel is considered a “living memorial” and it is an exceptional place to stay. They host many events and speakers. But, it is also a museum with a lot of historical artifacts from Marine history. The Marines’ Memorial Hotel also has an impressive library. After reading or thinking about reading, you can go eat at the Leatherneck Steakhouse and drink at Chesty’s Bar. The views from the bar and restaurant are outstanding and look over the San Francisco Bay Area.

For those on the East Coast, I highly recommend a trip to Quantico, Virginia to see the National Museum of the Marine Corps. Going up I-95, the Museum looms large and the architecture is inspired by the flag raising on Iwo Jima. The Marine Corps Museum has an impressive number of exhibits and displays from every battle the Marines have ever fought. There is also multiple events, speakers, and educational opportunities. Also, after walking through the exhibits for several hours, there is also a bar and restaurant, which is appropriately named Tun Tavern.

Studying history and Marine history is important. Obviously I am a staunch advocate of it and I hope to inspire others to get involved and do the same. While we celebrate 245 years of hooking and jabbing, we want to ensure that the Marine Corps continues for the next 245.

Finally, here is a list of several great books on Marine Corps history.

With the Old Breed: At Peleliu and Okinawa

The Last Stand of Fox Company: A True Story of U.S. Marines in Combat

Fields of Fire: A Novel

Marine!: The Life of Chesty Puller

First to Fight: An Inside View of the U.S. Marine Corps (Bluejacket Books)

Making the Corps: 10th Anniversary Edition with a New Afterword by the Author