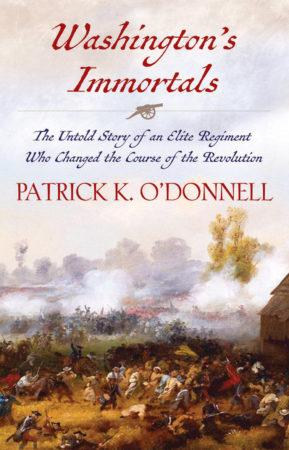 Washington’s Immortals was written by Patrick K. O’Donnell, a military historian who focuses primarily on special forces units. Although there weren’t any “special forces” units during the Revolutionary War, the author picked a little-known Maryland Regiment to show an evolution in tactics and leadership that still resonates with military professionals to this day. This “elite” regiment also forms the backdrop for a fascinating and comprehensive history of the Revolutionary War. It is always exciting to read a book that is exhaustively researched and well-written. This book skillfully uses facts, quotes, and statistics to drive the story forward. The narrative does not become oversaturated with details that belabor one event or person. Washington’s Immortals is easy, fast reading. The reader will be surprised by how much of the Revolutionary period’s military history gets covered. Due to this fact, the elite Maryland regiment being chronicled sometimes takes a backseat to the larger story of the American Revolution. Nevertheless, this book is a very fun read, and the reader will easily learn or re-learn a lot of interesting American military history.

Everyone has their own reasons for reading history and military history. I find that more than anything I am interested in the aspects of war and military history that pertain to human nature, leadership and decision-making. For this reason, I am going to break this review into three important themes that I found very relevant- leadership, tactics, and human factors.

This book has several examples of good and bad leadership. I have always been interested in General Washington’s leadership since reading David McCullough’s classic 1776. I’ve always found it fascinating to study how Washington made a lot of mistakes early in the war and occasionally came up with plans that were overly complicated. Sometimes it seemed like Washington’s army survived on nothing but luck and British miscalculations. But, Washington’s ability to adapt, learn, and use his personal influence helped him ultimately lead his army to victory over the British.

Additionally, this book chronicles many leaders- American and British- that I found fascinating especially men like Nathaniel Greene and Daniel Morgan. These two leaders emerged in the second half of the war when most of the fighting had shifted to the southern colonies. It was interesting to learn that Greene and Morgan were both extremely well-read and well-respected individuals. They were students of their profession and warfighting. Furthermore, they applied their knowledge and experience to the battlefield in creative ways. For example, at the Cowpens battlefield, Daniel Morgan did an exhaustive terrain study during an initial reconnoiter. He determined that a field with a sloping hill and a ravine that cut across the Green River Road was suitable to stop his men from retreating while also preventing the British from flanking them. He determined immediately to fight the battle at that location. Furthermore, the book also explains that leaders like Morgan knew not only the terrain but also his own men and the character of his enemy. To this extent, he developed tactics that exploited his enemies’ weaknesses and took advantage of his troops key strengths. Morgan and other American leaders helped pioneer the “defense in depth,” which was “novel for the time.”

Finally, I appreciate the way the book also explores examples of British and French leadership. Contrary to the way movies and the media have portrayed the British General Cornwallis, he comes across as a good example of a leader to study. The author highlights many situations in which Cornwallis led from the front and inspired his own troops with his personal example.

As I mentioned with the Daniel Morgan example, the Washington’s Immortals shows how American and British forces adapted during the war and changed their tactics to exploit their enemies’ weaknesses while maximizing their advantages. It was interesting to read that the British began the war with refined tactics that they had learned from the French and Indian War several years earlier. In fact, the British were experienced in fighting with lighter forces that could strike quickly and relied on speed and maneuver. The book explains that a lot of these tactics had been adapted from fighting alongside American Indian tribes. Furthermore, the American tactics of guerilla style warfare weren’t developed until the latter half of the war when the fighting had shifted to the southern colonies. The book shows that the Americans recognized that many of the British positions were spread throughout the Carolinas and they sought to exploit the isolated British positions by conducting raids, harassing supply lines, and springing ambushes.

Regarding the Maryland Regiment, the book explains that they were at the “forefront of helping pioneer an American Style of combat” (O’Donnell 86). O’Donnell explains:

Tactically, the Americans tended to concentrate their firepower on a specific point in the battlefield where it had the greatest impact. They also developed defensive maneuvers that wore down the enemy, taking advantage of the terrain and making the best use possible of the militia and Continentals they had at their disposal. At the strategic level, the Americans used intelligence as a force multiplier, helping them position their troops to the best advantage. In addition, the Marylanders and the rest of the American troops relied on speed and flexibility, combined with judicious risk taking; they avoided needlessly wasting men’s lives for operations that didn’t produce results.

The author details the challenges that Washington’s army faced in terms of men and resources. After reading this book, I am interested in learning more about the economics of the conflict and how America paid for the war especially as hyperinflation became a significant challenge. With the economic hardships that existed, O’Donnell explains that in the winter months many of the American troops were hiking without shoes. With the lack of necessities like food and clothing, it is not hard to understand why desertion was a significant problem that Washington had to deal with. The book highlights a lot of instances in which Americans deserted and fought for the British, and then returned to the American side only to desert again and fight once again for the British. These types of anecdotes are scattered throughout the book, and provide some lively entertainment.

Additionally, the Maryland Regiment fought the countless battles from 1776-1783 and marched thousands of miles. Due to their experience and reliability in combat, the regiment was frequently put at critical points in many of the engagements. The author explains that Washington frequently used them as a rear guard to protect the Continental Army. The best example of this occurred during the Battle of Brooklyn where the Marylanders earned the distinction “Immortal 400” for a daring assault that saved much of Washington’s army from total defeat. They were also used as a rear guard during the bold escape from Long Island in which Washington’s army was successfully ferried to Manhattan in the middle of the night with the Marylanders being the last ones to leave and narrowly missing the British. Later in the war, the Marylanders were used as a “forlorn hope” which the author describes as essentially a “suicide squad.” Throughout these difficult situations, the Regiment endured significant changes to its task organization as men were killed, wounded, or captured. They lost several key leaders, but there were some that prevailed until the end and comprised the backbone of the Regiment. These men included John Eager Howard, Colonel William Smallwood, Otho Holland Williams, Mordecai Gist, and others, whose names and personal example contributed significantly to America’s war for independence.

Finally, the author ends the book with a call to action for the reader. Having learned about the history of the Maryland Regiment and their tenacity and determination, the author explains that the graves of 256 of the Immortal 400 have yet to be discovered. The challenge is for lovers of history to tell the story of these brave men and spread the word of their heroism in the hope that one day the hallowed ground on which they fought and died will be re-discovered, re-purchased, and dedicated to their memory and amazing legacy.