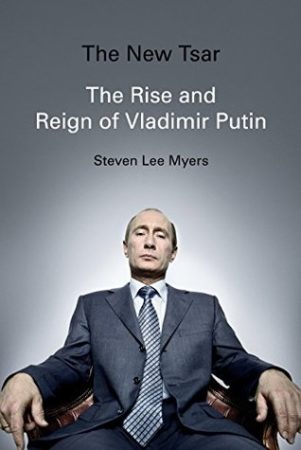 “Welcome to Putinland” is an in-depth series based on Episode 5 of the PME podcast, which will be released in early April 2017. The episode is an interview with New York Times columnist Steven Lee Myers, and it focuses on Myers’s biography, The New Tsar: The Rise and Reign of Vladimir Putin. In the first part of this series, the early life and rise of Vladimir Putin is explored. The goal is to draw out important facts and insights from Myers’ biography for learning and study.

Who is Vladimir Putin?

Vladimir Vladimirovich Putin was born on October 7, 1952 in Leningrad (now Saint Petersburg) a city “scarred” by the “Great Patriotic War” against the Nazis and the purges of Joseph Stalin in the late 1940’s. Steven Lee Myers writes that Vladimir Putin would grow up hearing “tales of heroism and suffering” (Myers 12). Below is a short video that offers some perspective on the siege of Leningrad during World War II. The siege lasted nearly 900 days, and the video shows some of the suffering that took place.

, Vladimir Putin became a KGB agent. Mr. Myers explains that Mr. Putin “represented a new generation in the KGB, the post-Stalin generation of recruits who were thought to be less ideological, too young to remember the horrors of Stalin’s regime.” In my interview with Mr. Myers, he also explains that 1975 was the “high water mark of the Soviet era.” Putin’s decision to join the KGB was partially influenced by a book turned movie called The Shield and the Sword by Vadim Kozhenikv. The book is a story about a Soviet secret agent in Nazi Germany. Putin became a foreign intelligence officer, and was initially stationed in Leningrad. Check out the book here:The Sword and the Shield: The Mitrokhin Archive and the Secret History of the KGB

As a KGB agent, Putin attended the Red Banner Institute in Leningrad where among other skills he learned “how to recruit agents, to communicate in code, to conduct surveillance, to lose a tail, to make and use dead letter boxes” (Myers 34). He was later assigned to Dresden where he would work as a foreign intelligence agent collaborating closely with the Ministry of State Security- the Stasi- until the collapse of the Soviet Union. Myers writes, “The KGB’s objective in East Germany was to gather intelligence and recruit agents who had access to the West” (Myers 43).

Vladimir Putin was in Germany during the fall of the Berlin Wall in 1989. He was deeply affected by the events, and what Myers calls his fear of “mob rule.” At one point, he stepped outside of his KGB villa in Dresden to confront a crowd, and warn them not to touch KGB property. The crowd left.

Putin’s early political career began when he worked for a politician named Anatoly Sobchak, who wanted to implement democratic reforms. Sobchak served as mayor of Saint Petersburg until 1996. Putin worked as his deputy with the job of attracting foreign investment to the city. When it appeared that his role in the KGB might be a liability to his boss, Sobchak, Myers explains that Putin noted “the American President, George H.W. Bush, had previously served as director of the Central Intelligence Agency, and no one disqualified him from holding office” (Myers 75). Myers also writes about an incident in which Putin met Henry Kissinger and as they chatted about Putin’s KGB background, Kissinger said, “All decent people got their start in intelligence… I did, too” (Myers 76).

Throughout the 1990’s, Russia’s transition to a more democratic political system was not easy. Myers notes that the elections were often “crazy,” yet they were “free and fair.” In 1996, Sobchak lost his re-election to mayor of Saint Petersburg. Myers explained in our interview that the loss of Sobchak affected Putin deeply. Additionally, due to the growing pains with democratic reforms, Myers writes, “Most Russians now associated their democracy with the dishonesty, criminality, and injustice they had long been conditioned to fear. Russia had become, as one historian put it, a ‘nightmare vision of the West’” (Myers 107). After the loss of Sobchak, Putin moved to Moscow where he worked for the Presidential Property Management Department and was later appointed by Boris Yeltsin to be chief of Presidential Staff. 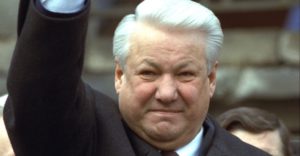 Boris Yeltsin became President of the Russia in 1991 after the collapse of the Soviet Union. He assumed the difficult role of leading Russia through a time of economic and political transition that began under Mikhail Gorbachev with the implementation of perestroika and glasnost. Yeltsin’s health plagued him toward the end of his presidency. (Source: History.com)

Putin’s career evolved rapidly. In July 1998 he was appointed by Russian President Boris Yeltsin as the director of the Foreign Security Service (FSB), which was the domestic descendant of the KGB. It is comparable to the FBI. Myers concludes that Yeltsin was looking for “his man in the FSB” and one who could crack down on economic corruption as well as “fight against political extremism and nationalism, against foreign spies, and against the newly arrived and slowly expanding World Wide Web” (Myers 125). With the new job at the FSB, “Putin immersed himself once again in the life of the intelligence agent, where everything is secret and everyone is suspect” (Myers 126). Myers also writes that Putin “exuded the full authority of the country’s secret service and a fierce determination not to let political or popular unrest undermine the state’s authority.”

On August 9, 1999, Yeltsin appointed Vladimir Putin as Prime Minister. Shortly after Putin became Prime Minister, war broke out between Russia and Chechen insurgents after Chechen insurgents invaded Dagestan. As Putin pursued a vigorous strategy to win the war in Chechnya, his popularity soared among Russian people. On December 31, 1999, Yeltsin resigned as president, and Putin became acting president. Putin was officially elected president on March 26, 2000 and inaugurated on May 7, 2000.