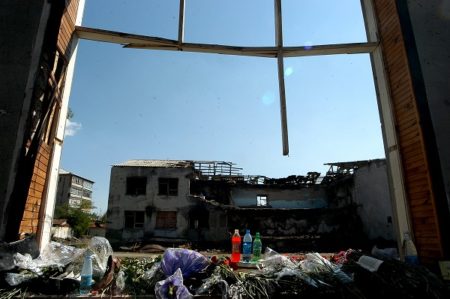 On August 26, 1999, Russia launched a war against Chechnya in response to the invasion of Dagestan by Chechen separatists affiliated with the Islamic International Brigade (IIB), an Islamic mujahedeen group, which recruited Chechen separatists and international Islamist fighters. In response, Russia invaded Chechnya on October 1, 1999. They established a siege on the Chechen capital, Grozny. Putin declared that Chechen President Aslan Maskhadov was no longer the legitimate leader of Chechnya in spite of his democratic election in 1997. The war turned into a bloody insurgency as Russia attempted to re-assert control over Chechnya. Throughout the conflict, Russia was condemned by international human rights activists for alleged war crimes and claims of misconduct to include indiscriminate killing of civilian targets as well as looting and pillaging by Russian troops. The Chechen separatists were led by two commanders: Shamil Basayev and Khattab, a man of Saudi descent and a veteran of the Soviet Union’s war in Afghanistan. These men led the separatists as part of the IIB. Khattab was killed in 2002. Basayev was killed in 2006.

In the wake of the war against Chechen insurgents, Russia was struck by several high profile terrorist attacks throughout the early 2000’s. The first major attack occurred in 1999 and involved the bombing of several apartment complexes. In response, Putin as Russian Prime Minister responded with a larger military campaign against Chechnya. It is important to understand that these actions and the perception that Putin was “banging the hell out of the bandits” increased his popularity among Russia’s citizens (Myers 164). In my interview with Steven Lee Myers, he explains that the first war against Chechnya under Boris Yeltsin in the mid-90’s was immensely unpopular. However, under Putin, the Russians waged a much tougher and brutal campaign designed to break the will of the Chechen insurgents. As a result, by 2009 Russian operations ended, and Chechnya remains largely pacified under Russian control.

It is also worth noting that Dzhokhar Tsarnaev and his brother, who were responsible for the 2013 bombing of the Boston Marathon in the U.S., were reportedly born in Kyrgystan and “are of Chechen ethnicity.”

The first of several notable terrorist attacks against Russian civilians and non-military targets took place in September 1999 as Russia experienced a string of four separate apartment bombings in Moscow, Buynaksk, and Volgodonsk. These bombings collectively killed 293 people and wounded over 1000 people. There was also a thwarted attempt on a building in Ryazan. However, this Ryazan incident is surrounded in suspicion and controversy over theories that the FSB may have staged it. David Satter, a research fellow at Stanford’s Hoover Institute and the author of the book The Less You Know, The Better You Sleep: Russia’s Road to Terror and Dictatorship under Yeltsin and Putin

, testified in a 2007 address to the U.S. House Foreign Affairs Committee that the apartment bombings were part of a “massive provocation” by the Russian government intended to solidify the political power of Vladimir Putin.

The next high profile attack was the Moscow Theater siege on 23 October, 2002. This siege, also called the Nord-Ost Theater siege, was carried out by 40 Chechens, who took nearly 900 hostages. While the Chechens demanded Russia remove its troops from Chechnya, Putin refused and affirmed that negotiations with the terrorists would not happen. Furthermore, Putin vowed to strike back at Islamic terrorists. In the wake of the Nord-Ost siege, the NYT reported, Mr. Putin’s opposition to negotiations had the effect of “hardening his stance” towards Chechnya’s rebel leader, Aslan Maskhadov. As the Nord-Ost crisis worsened, a plan was developed by the FSB to end it. Russian Spetsnaz troops pumped an anesthetic gas through the ventilation system and into the theater in an effort to incapacitate the hostage takers. However, the toxic, opiate-based gas had an adverse effect on many hostages, and reportedly killed a total of 116 people. Total casualties also included the 40 Chechen insurgents and 130 hostages. The terrorists who were knocked out by the gas were shot in the head by the Russian special forces. Below is a National Geographic documentary on the Moscow siege:

One of the most notorious and most tragic terrorist incidents was the Beslan hostage crisis that took place in September 2004. Beslan is a small town in North Ossetia in the North Caucus region of Russia. The hostage crisis began on September 1, 2004 and lasted for three days. Throughout the crisis, men, women, and children were kept packed on top of one another in the sweltering heat of a gym without food or water. There were over 1,000 hostages. By the time the crisis ended, the reported death toll included 186 children out of 330 total deaths. Putin asserted that the hostage crisis in Beslan was comparable to 9/11 for Russia. In the aftermath of the Beslan hostage crisis, Putin attempted to consolidate and expand the power of the Kremlin. As reported by The Moscow Times, “Putin used Beslan to toughen laws on terrorism and expand the powers of law enforcement agencies.” Steven Lee Myers writes that the incident shaped Putin’s thinking in that Putin “seemed to blame the siege in Beslan on Russia’s inability to preserve the strength that made the Soviet Union he remembered as a boy so strong and respected” (Myers 259). He quotes Putin saying, “We demonstrated weakness, and the weak are beaten” (Myers 260).

One of the most notable aspects of the terrorist attacks was the emergence of female terrorists referred to as “Black Widows.” There were 19 Black Widows in the Nord-Ost siege, and these women had bombs strapped to their chest intended to blow up themselves and the hostages as a means to deter Russian authorities. Additionally, the Black Widows have been held responsible for other suicide attacks in Russia to include the March 29, 2010 Moscow Metro attack, which killed nearly 40 people. There have been many other attacks perpetrated by the Black Widows at Russian bus stations and airports. A Daily Beast article entitled “Inside the Minds of Russia’s Black Widows” was published in 2013, and it claimed, “In the last 12 years, 46 women have turned themselves into suicide bombs in Russia, committing 26 terrorist attacks (some attacks involved multiple women). Most of the bombers were from Chechnya and Dagestan.”

The Washington Post reported that in Russia “more than 3,500 people are estimated to have died in over 800 attacks since 1970.” On April 3, 2017 at least 11 people were killed in a terrorist attack on the Saint Petersburg Metro. After the Metro bombing, a Rand article was published called “How Russia Became the Jihadists’ No.1 Target.”  The article claims, “Russia is fast replacing the United States as the No. 1 enemy of Al Qaeda, the Islamic State and other Sunni jihadist groups motivated by violent and puritanical Salafist ideology.”

Be sure to check out Episode 5 of the PME Podcast to hear the two hour interview with Steven Lee Myers, author of The New Tsar: The Rise and Reign of Vladimir Putin